Beware of Nail Galls on Linden 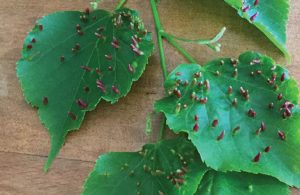 Tiny Eriophyes tiliae, an eriophyid mite, is a picky little critter that – as its specific name implies – makes itself known on linden (or basswood) trees. You cannot see the beast itself, but you can see the distinctive gall it creates on the upper side of a leaf. And even these are small.

The so-called nail galls normally appear in spring on a newly developed leaf, the adult mite having overwintered in a bark crevice or near a bud. As the mite feeds, a chemical in its saliva reacts with the leaf cells, causing the cells to expand and creating a gall. These appear greenish-yellow to pink at first, then mature to red or brown.

Brilliant red nail galls on linden leaves are produced by Eriophyes tiliae, an eriophyid mite that, as its name implies, prefers to make a home on the leaves of Tilia species.

There are usually several galls scattered about the leaf surface, and while their appearance may be somewhat startling (if not amusing), it’s rare that an entire plant will be affected, and the damage is cosmetic. There’s no need for control, unless a client insists. In that case, removing the offending leaves may be just the ticket. The nail galls shown here appeared on one small branch of a very large tree. They just happened to be overhanging the sidewalk.