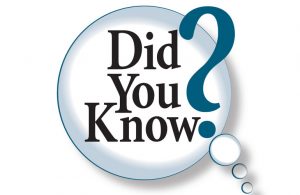 1. Did you know: that 10 states in the U.S. account for 65 percent of horticulture production? California, Florida and Oregon led the nation in sales, according to the 2014 USDA Census of Agriculture, Horticultural Specialties report. Hort operations sold a total of $13.8 billion in floriculture, nursery and specialty crops, which is an increase of 18 percent from 2009. Awesome. Plus, family or individually owned operations, of course, made up the largest number of businesses—53 percent—but corporate operations accounted for 76 percent of sales. (Don’t you love this stuff?) And here’s a tasty little tidbit: The number of businesses that grew food crops under cover increased a whopping 71 percent since the previous census.

2. Did you know: that the gingko tree (Gingko biloba) is among the most ancient of plants still in existence? Considered a living fossil, it’s said to have survived, unchanged, for more than 200 million years. It’s also a lonely specimen, being the only one of its species, with no known living relatives. With its roots in China, the gingko (or maidenhair tree) has made its way around the world to become a popular landscape tree, despite the fact that the female produces foul-smelling fruit (best to spec a male, if you want to maintain good client relations).

3. Did you know: that Arbor Day this year is April 24? Arbor Day was first observed as a formal holiday in 1872. It began in Nebraska, and credit for its founding is given to journalist J. Sterling Morton. It’s said that on the original day—April 10—Nebraskans planted more than a million trees. The observation gained popularity across the nation and by 1920, more than 45 states and territories were celebrating Arbor Day (some on the day of their choosing). What’s more, the 1,700-acre Morton Arboretum in Lisle, Illinois, was founded in 1922 by Joy Morton (also founder of the Morton Salt Company), the eldest son of J. Sterling.

5. Did you know: that Siberian huskies (and other Nordic breeds) tend to blow coat—shed heavily—twice a year, and during that time you can grab handsful of soft fur without harming them? It’s true. This fur, taken from a presumed predator, can then be tucked in and around valued garden plants that tend to attract rabbits and other gnawing critters. Genius! Or so it would seem. It will not, unfortunately, deter these pests, nor will it protect your plants. Instead, it will provide luxurious material for local birds, who use it to line their nests. We know; we’ve tried this.

For more, get a husky. Better yet, leave them to the professionals.