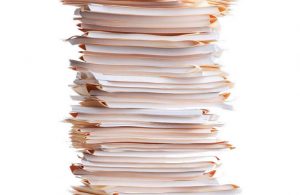 Things are looking up. That, in a nutshell, is what the massive study known as the USDA Census of Agriculture, Census of Horticultural Specialties, tells us. It’s welcome news following a long and slow recovery from the Great Recession, but it’s not enough just to say that the outlook is rosy. The figures reported by the USDA’s National Agricultural Statistics Service (NASS) tell the real story.

According to the 2014 Census of Horticultural Specialties, sales of floriculture, nursery and specialty crops rose 18 percent over figures reported in 2009. Hort operations in the U.S. sold a total of $13.8 billion – that’s billion, with a B – and the number of operations in the country increased 8 percent to a total of 23,221.

Those are the overall figures. And once again, commercial horticulture has topped Hollywood: According to the statistics site http://Statista.com, “North American box office revenue amounted to 10.4 billion U.S. dollars in 2014.”

If you’d like to read the full report – all 576 pages of it – you can download the document at http://www.agcensus.usda.gov/Publications/Census_of_Horticulture_Specialties/.

Alternatively, the USDA makes it very easy to access specific information, such as sales broken down by type of plant. For example, Table 19 presents the figures for broadleaf evergreens, ranging from Azalea to Viburnum (and “Others”), and breaks down the sales in handy columns, including “All sales,” “Wholesale sales,” “Retail sales” and “Evergreens on operation” as of January 1, 2015.

Let’s take a look at some of the data for Azalea, as reported in Table 19:

So if you’re interested in the overall picture, get out your magnifying glass and plan a bit of time to read. (Or download the pdf and magnify it on screen.) But, as we’ve mentioned, you can find the type of plants you’re looking for and go directly to the scoop on the plants you grow.

The USDA performs its overall Census of Agriculture each decade, and the more specific census of horticultural specialties has been published accordingly; reports have been released for 2014, 2009 (only five years in between this time around), 1998, 1988 … and back to 1889. The survey report does a nice job of presenting historical figures, giving growers a chance to view trends and place figures into perspective. 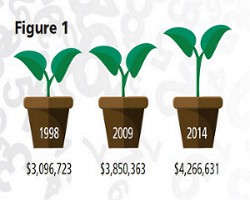 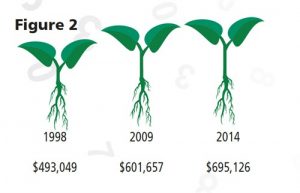 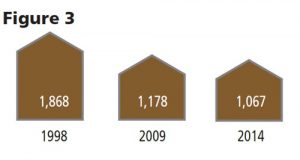 Diversification is accounted for

As growers across the country reevaluate their markets and programs, adding and subtracting inventories according to profitability and demand – and as consumer tastes change with the times – diversification of product is the new norm. The census accounted for this trend, including 60 new items to the questionnaire.

Sales of such items as peonies, lavender, black-eyed Susan, cacti and other succulents were tallied, as well as the ever-increasing production of simple food crops like veggies and herbs. The top-selling commodities in 2014, as compared to 2009, are shown in Figure 4.

Not much has changed since the previous census issued in 2009, when the top five states in terms of nursery sales were California, Florida, Oregon, Texas and Michigan, in that order. Overall sales figures have increased in each of the top five, with California, for example, having shown $2.0 billion in 2009 and Michigan selling $459 million for the same year.

This year’s survey concludes that 10 states account for 65 percent of all U.S. horticulture sales in 2014 (see Figure 5).

Not surprisingly, family-owned (or individually owned) operations comprise the majority of businesses, accounting for 53 percent. Corporate operations, however, account for 76 percent of sales at a total of $10.5 billion.

To summarize from a pretty long table titled “Horticultural Specialty Operations and Sales by Kind of Business and Legal Status for Tax Purposes: 2014,” we’ll take a look at the overall totals, and then just a few of the subcategories.

For “All horticultural specialty operations,” as we stated in the introduction, the total number of operations is 23,221. Of those, 12,193 are family or individually owned; 1,873 are partnerships; 8,736 are corporations; and 419 are listed as “Other – cooperative, estate or trust, institutional, etc.”

Let’s then jump to nursery stock, where we see that the total number of operations is 5,963. Among those, 2,437 are family or individually owned businesses; 471 are partnerships; 3,004 are corporations and 51 are “other.”

How about the category of “Propagative horticultural materials, bareroot, and unfinished plants?” Total number of operations equals 445. Of that number, 164 are family-owned; 33 are partnerships; 215 are corporations; and 33 are “other.”

What’s it all worth?

There’s value, and there’s value. Among the survey questions about sales – income – are questions that help us understand the value of infrastructure. How much area is in production? How much was invested in machinery and equipment?

Overall, the value of land and buildings is reported to be $23,184,945. That total figure is divided into eight types of business: annual bedding/garden plants; potted herbaceous perennial plants; potted flowering plants for indoor or patio use; foliage plants for indoor or patio use; cut flowers; cut cultivated greens; nursery stock; and propagative horticulture materials, bareroot and unfinished plants. We’ll take a look at three of these.

On the other hand, where there’s income, there’s expense. You have to pay to play, and the figures here are impressive.

The survey breaks down expenses intricately, and it’s well-worth the few minutes to take a look at the entire accounting, which can be found on Table 33 online (see sidebar).

Briefly, however, we’ll look at just a couple of the general categories of expense, including chemicals and containers.

The USDA’s National Agricultural Statistics Service surveys growers of “specialty crops” each decade, although there was only a five-year span between this most recent report and the previous one issued for 2009. The questionnaire is mailed to growing operations, and completion of the survey is considered mandatory. Even so, the information reported is confidential, in that data cannot identify specific operations. And keep in mind that information gleaned from the survey is the result of self-reporting.

Under the broad category of “Greenhouse, Nursery, and Other Horticultural Labor,” we find the numbers of hired workers. Within the universe of “horticultural specialty” operations, 17,086 operations reported their figures. Among that population, the total of hired workers equaled 274,759. This figure is further broken down not only by category of operation, but by number of days worked, giving us a glimpse into full-time and seasonal figures. 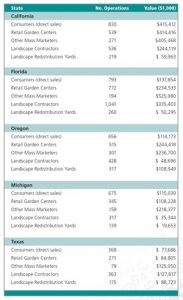 Does your business qualify as a “horticultural specialties operation” for the purposes of the census? If you received a survey form from the USDA, it’s likely that it does. However let’s be more specific. Here’s how the NASS defines the term (with our emphasis):

How – and where – plants are sold

The 2014 Census of Horticultural Specialties breaks down the value of specialty crops sold according to marketing channels, parsing the overall data by both crop value and number of operations. Put a bit more simply: We can easily determine how much was sold at retail, to landscape contractors and landscape distribution yards, as well as supermarkets, mass marketers and other channels.

In the Golden State, 830 operations sold $415,412 through direct sales to consumers. The figures for sales through retail garden centers/nurseries (excluding mass marketers) are strikingly similar: $414,416 sold by 539 operations. Through “other mass marketers,” 271 operations sold $405,468 worth of specialty crops. Landscape contractors purchased $244,119 in goods from 536 operations; landscape distribution yards spent $59,963 on products from 219 operations.

The relevant data for the Top Five states are shown here.