Elm yellows, a devastating disorder that destroyed thousands of Ulmus species in the 1990s, appears to be making a comeback. Vigilance and early intervention may help to control its spread. 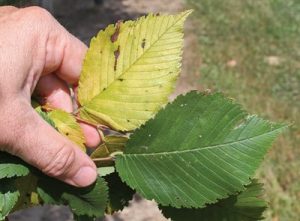 Onset of elm yellows is obvious in the leaf on the left, as compared to a normal, healthy leaf, right.
Photos courtesy of Joe Boggs

Elm yellows, formerly known as “elm phloem necrosis,” is a deadly disease of American (Ulmus americana), red (Ulmus rubra) and winged (Ulmus alata) elm. The disease, which in the early ’90s devastated elm populations in the northeastern, Midwestern and southern United States, is starting to reemerge most likely because of the reintroduction of Dutch elm disease-resistant cultivars of American elm into the landscape. American elms are valuable shade trees characterized by dense, dark green foliage; their fast growth and vase-shaped silhouette make them a desirable selection.
While these new cultivars are resistant to Dutch elm disease, they are not resistant to elm yellows. Death from elm yellows occurs quickly. Trees that appear perfectly healthy with normal twig elongation and leaf expansion early in the growing season are often dead by the end of the season.

The disease is caused by the pathogen ‘Candidatus Phytoplasma ulmi’, a single-celled organism belonging to a group of plant pathogens called “phytoplasmas.” These microorganisms were not known to exist prior to 1967, and until their discovery, the disease was thought to be caused by a virus. Infections by phytoplasmas are limited to phloem tissue. Depending on the host, these pathogens can produce a wide range of symptoms, including leaf discoloration (yellowing), production of leaf-like structures in place of flowers (a phenomenon known as “phyllody”), production of green rather than colored flowers, and abnormal stem growths such as rosettes and witches’ brooms. In fact, the symptoms can be easily confused with diseases caused by other pathogens, particularly viruses. 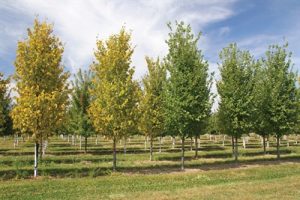 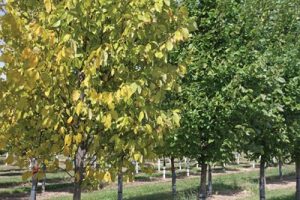 Trees infected with elm yellows stand out among healthier plants.

Phytoplasmas spread from plant to plant by root-to-root graft and, most importantly, through insects that use their piercing-sucking mouthparts to feed on the phloem. These include leafhoppers, planthoppers, treehoppers, and froghoppers (also known as spittlebugs). While the literature generally refers to the white-banded elm leafhopper (Scaphoideus luteolus) as the primary vector responsible for spreading the elm yellows phytoplasma, recent research has implicated other insects, including the meadow spittlebug, Philaenus spumarius; the spittlebug, Lepyronia quadrangularis; the leafhopper, Allygus atomarius; and another leafhopper in the genus, Latalus. 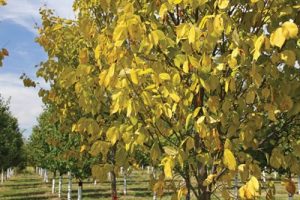 Trees affected by elm yellows will change color without evidence of foliage wilting.

The name of the disease clearly describes the color of the leaves on infected trees. Sometime in mid-to-late summer, the normally deep green canopy rapidly turns an intense shade of yellow all at once. Eventually, elm yellows-infected trees will defoliate in late summer to early fall. The color change occurs without the leaves first wilting; other than being yellow, leaves appear completely normal. Leaf yellowing could be confused with those afflictions caused by nutrient deficiencies. However, the chronology of the yellowing is different, as nutrient deficiency symptoms appear on new leaves early in the season. 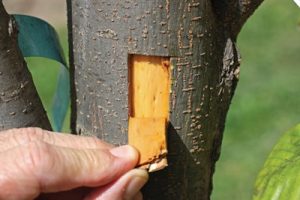 Once called “elm phloem necrosis,” elm yellows causes the inner phloem to discolor, turning the tissue to a tan to caramel hue.

Elm yellows was once called “elm phloem necrosis,” and the old name captures the essence of the infection since the inner phloem, which is the target tissue attacked by the pathogen, becomes tan to caramel colored. The pathogen first migrates to the roots, causing extensive necrosis of the feeder roots, then the main roots. Thus, the phloem discoloration is first apparent at the base of the trunk and on the lower branches and can be exposed by carefully peeling the bark. However, elm phloem tissue will naturally become discolored by oxidation when exposed to the air for a few minutes; when performing this test, be sure that samples are fresh!

A chemical reaction occurs that produces methyl salicylate (oil of wintergreen) in the phloem tissue that is colonized by the elm yellows phytoplasma. Pieces of the inner bark cut from the white wood near the base of the main stem that is colonized by the phytoplasma may be placed in a sealed jar for a few minutes and will produce the wintergreen scent. While the scent is usually very faint at first, it becomes easily detectable after the sample has been held in the jar for about one to two hours.

In red elms, the disease causes witch’s broom and the discolored phloem does not occur. The wintergreen odor in this case resembles maple syrup.

When making a field identification of the elm yellows it is important to differentiate between this disease and other vascular diseases of elms, including Verticillium wilt and Dutch elm disease. Both of these diseases are caused by fungi (not phytoplasmas) that infect the xylem (not the phloem); as a result, the xylem shuts off the water supply to the leaves and the leaves rapidly turn from yellow to brown and eventually wilt. If the water flow to newly elongating stems is disrupted, the stems may curl at the tips to form a “shepherd’s crook.” This symptom is absent in elm yellows-infected plants. With Dutch elm disease and Verticillium wilt, symptoms tend to occur at first on sections of the tree, such as a few branches. Although death of the entire tree may occur quickly, it most often requires years for infected trees to die due to these diseases. 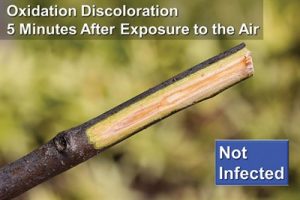 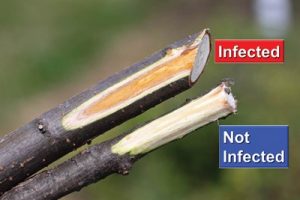 Peeling back the bark of an infected tree reveals characteristic discoloration. However, discoloration due to oxidation will occur naturally within minutes of exposure, so when diagnosing, it’s critical that samples are fresh.

Unlike plant pathogenic fungi, phytoplasmas are not culturable in the laboratory. However, they can be detected using molecular and serological methods including Polymerase Chain Reaction (PCR) and Enzyme-Linked Immunosorbent Assay (ELISA). Given the drastic response required for control of this disease, a field diagnosis should never serve as the final word on elm yellows. A positive confirmation of a suspected infection must be made by a plant diagnostic clinic capable of conducting these diagnostic tests.

Unfortunately, very little can be suggested for reducing losses from elm yellows. The most effective method for controlling this disease is to quickly remove and destroy infected trees. This will reduce localized reservoirs of the phytoplasma, making new infections less likely. 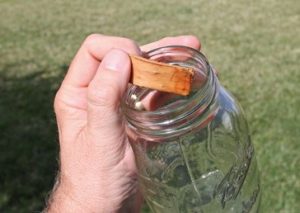 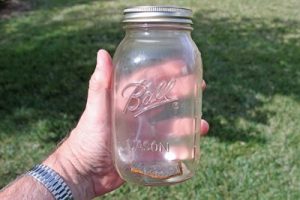 A chemical reaction occurs that produces methyl salicylate (oil of wintergreen) in the phloem tissue that is colonized by the elm yellows phytoplasma. If a sample is held in a jar for one to two hours, the scent becomes easily detected.

While insecticide sprays to protect elms against the bark beetles that spread the Dutch elm disease fungus have been effectively used in the past, no evidence of the effectiveness of this management approach to kill the insects that spread the elm yellows phytoplasma is currently available. Because the number of insect species involved in the transmission of this disease is so high, timing of insecticide applications would need to be matched to varying life cycles, including differences in numbers of insect generations. Finally, there is simply no way of knowing whether or not the distance between a healthy and an infected elm is beyond the flight ranges of the insect vectors. This means applications would need to be made preventively, year after year.

Thus far, elm yellows has occurred in sporadic localized outbreaks; it is not behaving like Dutch elm disease relative to presenting a widespread threat to elms. This means nursery producers should not fear growing Dutch elm-resistant American elms, and landscapers should not avoid using this beautiful tree in their designs. However, both should be vigilant for the symptoms and prepared to act quickly with getting a confirmation and with destroying trees that are confirmed to be infected.

Francesca Peduto Hand is an assistant professor of ornamental and turf pathology at The Ohio State University’s Department of Plant Pathology in Columbus. She can be reached at [email protected]

Joe Boggs is an assistant professor with the Ohio State University Extension and OSU Department of Entomology. He can be reached at [email protected]

All are members of the Ohio State University Extension Nursery Landscape and Turf Team.