Colorful landscapes show that Xeriscape installations needn’t be limited to rocks and cactus. And they do need water-just not much.

Let’s put the notion to rest once and for all: The term “Xeriscape” is not pronounced “zeroscape.” Granted, some detractors use the mispronunciation as a joke, but far too many sincerely believe it. Xeriscape stems from the root word “xeric” – in essence, dry. To get wordsmithy about it, the definition of “xeric” is: “characterized by, relating to, or requiring only a small amount of moisture.” So much for the word itself; it seems pretty clear.

A common misconception remains, however, and it’s easily debunked. The practice does not limit an installation to cactus and concrete, and until they’re established, plants do need a bit of supplemental water. “Rather than paving over the back yard with concrete,” says Dan DeGrush, “homeowners can have a xeric landscape with several different species of plants. You can have purples, reds, yellows, whites; there really are a lot of color options and plants that flower at all times of the year.” 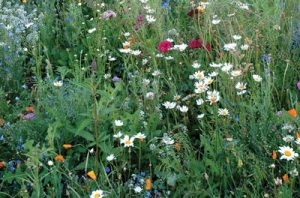 Click image to enlarge.
A bouquet of wildflowers graces the Xeriscape garden of a Denver-area residence.

DeGrush is a designer with Lifescape Associates, a design/build firm in Denver, where the concept of Xeriscape originated. Still, he says, “I’ve seen people put concrete in their front yards just to avoid watering.”

The need is now

At its very core, Xeriscape is a way of landscaping that promotes water conservation, and no matter where the landscape is located, that’s a noble goal. But it’s ever more critical given that a significant part of the country is continuing to experience drought. The past couple of years have seen record heat and aridity, and the U.S. Drought Monitor, the arid-conditions watchdog for the National Oceanic and Atmospheric Administration, predicts that drought will persist or worsen in the next several months across well more than half of the nation. What seems like a reasonable idea – conserving water use in managed landscapes – soon may be a requirement. 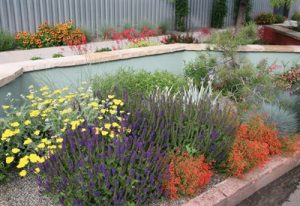 Click image to enlarge.
The award-winning display garden at Lifescape Associates in Denver shows just how colorful a Xeriscape installation can be.

A Xeriscape installation doesn’t mean no water is needed; without sensible application of supplemental irrigation, no garden can establish. As DeGrush explains, a successful low-water landscape actually requires attention to three things: “Plant selection, soil preparation and your irrigation system.” In the Denver area, where DeGrush works, “… and all along the Front Range, irrigation systems are paramount,” he says. “There’s just not enough water to keep newly planted plants alive.” 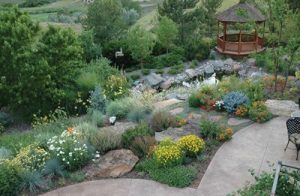 What’s needed even before the first sketch is drawn, DeGrush explains, is to help your clients and customers set the right expectations. Show them the variety of colorful plants that can fill a beautiful, low-water garden, and then help them understand that “lush” isn’t instantaneous. The majority of plants take about three years to establish themselves, he says, and unless your client accepts that, she’s bound to be disappointed.

Click image to enlarge.
The view from a suburban hot tub shows the near-seamless transition from installed Xeriscape to natural property.

“The first year,” he says, “all you really care about is the root system. You don’t really care if there are that many flowers on the plant, because it’s putting energy into root growth.

“The second year,” he continues, “you get a mix of everything: You’re focusing on root growth; you’re watching the plant get a little larger; you’re getting some flowering, but the plant is not at its peak. The third year – that’s when the plant is happy underground, and because it’s spending less energy on its root system, it can spend it on flowers and vegetation. The plants are starting to live on their own; they need less help from the irrigation system that they absolutely needed in their first two years.” 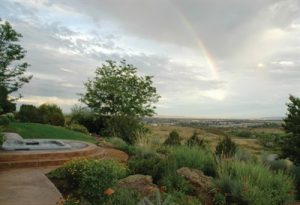 Click image to enlarge.
On a terraced property where the suburbs meet “native” space, a xeric installation includes a bit of turf as well as select shrubs and perennials that require very little supplemental moisture once they’re established.

A bit of water goes a long way

The benefit of drip irrigation in a Xeriscape garden, he says, is that the system targets only the part of the plant that needs water – the roots. And if you install a zoned, ET-based “smart” system, you can manage water use for each specific microclimate on the property. “If you’ve got a part of the garden that’s on the south, that’s all sun and slope,” DeGrush explains, “you can program the system differently than for the north side, in the back, where water is needed less. 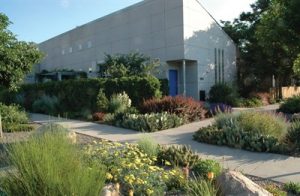 Click image to enlarge.
Even in the city, a xeric landscape provides a lively contrast to the flat gray of concrete surfaces.

“Further,” he continues, “you can turn it down in the third year, and you’re not only saving water, you’re saving more money.”

Clients may balk at the cost of a high-end irrigation program, but as DeGrush points out, the local municipality just might offer some assistance. In Castle Rock and Aurora, Colo., for example, homeowners can receive rebates for installing water-saving irrigation systems. “If you can save a few bucks that way,” DeGrush says, “you can put the money into more plants. A couple hundred dollars on a rebate; that’s a good situation for [the homeowner].” 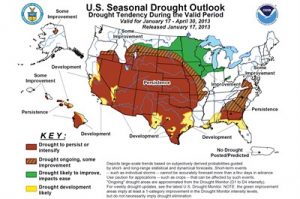 Is it just for deserts?

Although Xeriscape as a design concept began in a dry, High Plains town, the approach is appropriate in any location where water must be conserved. As DeGrush says, “Even in deserts, there can be extremely diverse areas, with diverse plant species.”

Transitional spaces are especially good candidates for xeric gardens, where plants can help to blend the installed landscape with the natural. And these tend to be spaces where supplemental water may be difficult to come by. It took off in Colorado where, DeGrush says, “There are great transitional spaces because the grasslands have been here forever, and if you’re going to connect the [built] landscape to that space, bringing in lots of color is what we’re after.”

Sourcing your plants locally is a good idea, but be sure to talk with your grower and understand which plants do best to provide abundant color and interesting form while requiring very little input. “Xericape planting is very microclimate-driven,” DeGrush says. “Areas on the same property can differ in terms of sun, slope, deer pressure, water, soil … different plants will tolerate different conditions. But with a good irrigation system, selecting the right plants and prepping the soil properly, you can get all these sites to look good.”

If your suburban clients have a borrowed vista, you can make the most of it with a transitional dry garden. If they live in town, you’ll save them from battling the water district – and you’ll save them money – by applying a few Xeriscape principles. Just assure them that they can have easy care, lower utility bills and lots of vibrant color.

Sally Benson is editorial director for American Nurseryman. She can be reached at [email protected]