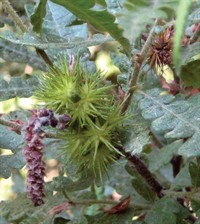 Getting to the root-or rhizome-of Comptonia peregrina propagation will help make this splendid native selection a viable, commercial alternative to invasive landscape plants.

Sweet fern’s ornamental interest includes nutlets and male catkins.
More and more ornamental landscape plants are being found to exhibit invasive tendencies. Some of these species have been lost from the nursery trade due to legislative bans or the desire among the gardening public to use fewer invasive plants. Native plants are a great, sustainable alternative for invasives because they do not pose the threat of introducing unwanted new species to an area. Natives are popular for use in creating attractive landscapes that blend naturally with the surrounding flora. When established in sites similar to their natural habitat, native plants require little maintenance, are well adapted to their environment and attract beneficial wildlife to the garden.

A sweet but stubborn plant

Comptonia peregrina, commonly known as sweet fern, has been considered a “sweetheart” plant among native plant enthusiasts because of its ferny fragrant foliage, short stature and ability to colonize tough sites. Over the years, there has been sporadic interest in utilizing sweet fern, however its rise into horticultural prominence has been delayed due to difficulties in propagating the plant. In addition, information about where and how to use this plant effectively in the landscape is lacking. There even seems to be a widely held misconception that sweet fern is not adapted to cultivated conditions. Despite these issues, lots of people still have a strong desire to grow and use this plant. 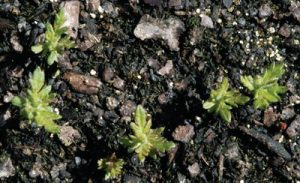 Sweet fern is a low growing shrub, up to 3 feet tall with a dense, mounded habit when grown in full sun. It is native to eastern North America from Nova Scotia to North Carolina, western South Carolina and northern Georgia, and west to Saskatchewan, Minnesota, Illinois and Tennessee. Plants are cold hardy to Zone 4. Sweet fern is desirable for the sweet fragrance it produces, most noticeably on warm sunny days, and for its dark green, fern-like foliage. The alternate, simple leaves are linear, 2 to 5 inches long and one-third to one-quarter inch wide with coarsely toothed margins. Plants are monoecious or dioecious and the fruit or nutlet is enclosed in a burr-like cluster of bracts. Sweet fern fruits are not dispersed by animals or wind; they just fall to the ground when ripe.

Like other members of the bayberry family (Myriaceae), sweet fern spreads slowly by underground rhizomes to eventually form colonies. In a suitable location, rhizomes may spread 2 to 3 feet from the mother plant over the course of a few years. The shrub is valued for its ability to grow in dry, sandy and infertile soils with full sun exposure. These sites include dry piney woods, exposed gravelly slopes, abandoned pastures, barrens, road cuts, highway embankments and cut-over forested land.
Seeds are long-lived, and research has shown that banked seeds can work quickly to colonize areas following disturbance by fire or clear cutting. In a forest that lacked sweet fern for 70 years, Peter Del Tredici found sweet fern seedlings in the area soon after it was clear cut. Del Tredici theorized that the seedlings must have originated from seed fallen from plants present at the site prior to its forestation. Those are some mighty long-lived seeds! Sweet fern tolerates poor soils due to its ability to fix nitrogen by root nodules in association with the actinobacterium Frankia.

Despite these desirable attributes, the fact that sweet fern’s propagation is not straightforward has held it back from being grown on a commercial scale. Propagation by seed is considered difficult because seeds have a complex dormancy. In nature, seeds fall from plants and become buried by organic matter. Over time, chemical inhibitors are leached out of the seed coat and seeds are scarified by the seasonal freeze-thaw cycles. Then, when environmental conditions are favorable for germination, seeds will germinate. Researchers Dow and Schwintzer found that seed-bank seeds had 70 percent germination, while fresh seeds off of living plants had only 1 percent germination. Plant propagators don’t have the luxury of waiting a number of years for fresh seeds to naturally lose their various dormancies – they need seeds to come up soon after being sown.
Seed germination requires a combination of scarification, chilling and treatment with gibberellic acid. Fresh seeds treated with gibberellic acid following scarification may have up to 80 percent germination, while seeds treated with gibberellic acid alone may have 20 percent germination. Breaking complex seed dormancy, like that of sweet fern, is laborious and can produce inconsistent results.

Stem cuttings are generally the most cost-effective method for propagating woody plants, but this method has not been successful for sweet fern. Micropropagation of sweet fern has been reported, but this method is probably not cost effective since no producers seem to be propagating it this way. The one propagation method that has been shown to work well for sweet fern, however, is root cuttings (actually rhizome cuttings) taken in late fall to late spring when plants are in winter dormancy. Sweet fern rhizomes contain shoot buds that are stimulated to grow when the rhizome is cut. Researchers studying the plant in 2002 found that rhizome cuttings taken in late fall and provided a cold treatment of two to three months resulted in high rooting percentages and a consistent crop of cuttings in early spring. I have experimented with taking rhizome cuttings of sweet fern and found that the type of propagation medium used influences propagation success rate.

Existing surplus container production of sweet fern can be used as a source of rhizomes, when available. Alternatively, natural stands of sweet fern can serve as an easy source of rhizome pieces, provided permission is obtained. Using a digging spade, undercut sweet fern plants about 3 to 4 inches down and lift rhizomes from the soil. Rhizomes can be cut into small pieces and potted, or they can be placed in plastic bags, moistened and stored in a cooler. Rhizomes can be cut into 2-inch-long pieces, and one or two pieces can be potted per 2-inch liner container. 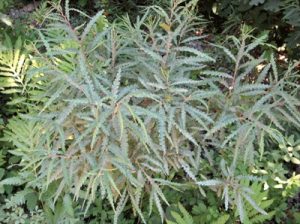 Plant rhizomes just below the media surface, no deeper than one-quarter inch. I tested four different medium types for propagating sweet fern from rhizome cuttings and found that horticultural grade vermiculite produced the greatest number of shoots and shoot length per pot. Metro Mix 510 growing medium was the second-best medium tested. Straight perlite or sand did not work well.

After potting up the rhizomes, water pots thoroughly and place either in a cooler or minimally heated hoop house. A two- to three-month cold period serves to break bud dormancy and holds cuttings until warmer weather arrives in spring.

Once dormancy is broken through chilling, cuttings can be brought into a warm greenhouse and shoots can be forced from rhizome pieces. One to two weeks after plants are introduced to the greenhouse, small shoots should be visible breaking through the media surface. Shoots will continue to elongate and develop into small plantlets. It has been reported that it may be possible to root young shoots at this stage. Shoots should be 3 inches or shorter, and 3,000 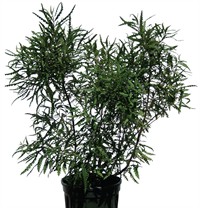 ppm IBA-talc rooting hormone should be used. Shoots at this stage may be easier to root because they could be expressing a more juvenile physiology or state of the plant. I have not tried this approach but instead have allowed young plantlets to develop into strong liners in 2-inch containers, which takes about six weeks.

Marketable, 2-gallon sweet fern plants can be grown in one calendar year.

Most nurseries that grow sweet fern find that it sells as a one or two-gallon container plant. However, some companies that sell the plant for restoration purposes grow it as a quart-size liner. Growers should be able to produce marketable, quart-sized plants in four to six weeks from recently propagated but established, 2-inch pot liners.

Two-gallon plants can be produced in a single growing season and will be ready for sale the following spring. To accomplish this, two liners (quart sized) should be transplanted into each 2-gallon container. Using two liners per container produces fuller plants more consistently than if a single liner is used. The medium I used successfully with sweet fern was a 4:2:1 aged pine bark:sphagnum peat moss:sand blend. Other similar medium types may also work well, but I have not experimented with this. 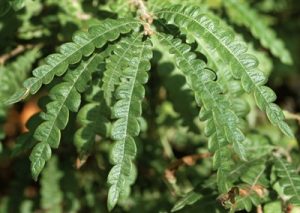 A 20-10-20 liquid fertilizer at 200 ppm was applied to 2-inch pot liners once a week. Quart and two-gallon containers were topdressed with a controlled release fertilizer at the recommended low rate on the label. Sweet fern can be overwintered successfully using standard unheated hoop house conditions.

Making the most of sweet fern

Sweet fern should be utilized in mass plantings or in repetition in the landscape. It is an excellent foundation plant around residences, and its fine-textured foliage can be used to complement coarse-textured plants. It is also a good facer plant for taller, leggier shrubs and small trees.

This underused shrub should be planted in areas where people can appreciate its unique aroma and sited so plants get afternoon sun to release aroma maximally. Due to its rhizomatous growth habit and size, plants can be used to stabilize a gravelly bank or along roadways and driveways. Sweet fern can be a unique addition to the herbal garden. The foliage can be harvested in early summer, dried and used to make tea. Planting sweet fern in wet areas should be avoided since the plant dislikes wet feet. I have heard many times that sweet fern does not transplant well, however I have not experienced problems with this.

Little is understood about how adaptable sweet fern is in cultivated situations. One situation that is always tough to find plants for – and where you would expect sweet fern to do well – is difficult sites like parking lots. These sites present a number of landscape challenges including infertile, compacted soil, reflected sunlight, high heat, wind, road salt, snowplow issues and pedestrian pressure. Since 2010, I have been conducting a native shrub evaluation study in a parking lot on the University of Connecticut campus in Storrs, Conn. Sweet fern has been the top-rated shrub, and the plants look outstanding. All of the sweet fern plants in the trial have behaved similarly, forming healthy, dense mounds up to 3 feet tall.

Clearly, sweet fern has a lot of potential as a commercial ornamental plant because it can be used in difficult sites, people like it and its propagation issues can be overcome.

There are a number of other native plants that demonstrate commercial potential, but their landscape suitability has not really been explored thoroughly. The goal of my research program at UConn is to identify which native plants have potential for landscaping and determine their propagation and production techniques so that it will be easy for the nursery industry to produce them for the gardening public.
Jessica Lubell, PhD, is an assistant professor of horticulture in the Department of Plant Science and Landscape Architecture, University of Connecticut, Storrs. She can be reached at [email protected]

Magee, D.W. and H.E. Ahles. 1999. Flora of the northeast. University of Massachusetts Press.