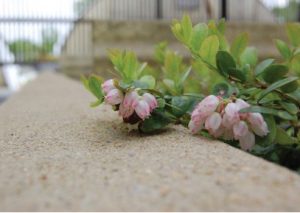 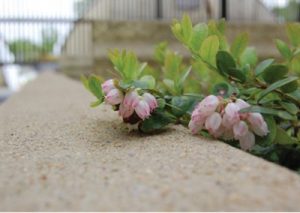 Gaylussacia brachycera, the box huckleberry, is a native, semi-evergreen groundcover that tolerates difficult conditions. It has attractive white flowers in spring, nice foliage through the summer, and rich fall color that holds into the winter. Currently, the U.S. National Arboretum is doing research to bring box huckleberry closer to being a viable landscape plant. Currently, it is little known among nursery professionals and the public, so there are few landscape plantings of box huckleberry in public or private gardens.

Box huckleberry is native to the eastern United States. Its range extends from Delaware south to North Carolina, and west to Tennessee. It grows naturally on well-drained soil in shade, predominantly in the understory of the tree canopy. In the wild, box huckleberry forms rhizomatous colonies of suckering roots that can colonize tens of acres; these plantings are estimated to be thousands of years old. Because of the limited number of plants in cultivation, further cultivation in a variety of settings and climates would be necessary to fully demonstrate whether there is any danger of invasiveness. Currently, I have not seen nor heard of box huckleberry having the possibility of becoming invasive. From my experience, G. brachycera is highly adaptable to wet or dry conditions and prefers sites that are well drained.

This plant blooms in spring with small white flowers that are sometimes tinged with pink. During the summer, box huckleberry’s foliage is thick and waxy with an attractive sheen to its appearance. It has vibrant fall color ranging from reddish green to fiery scarlet that holds into the winter. Box huckleberry could be a useful semi-evergreen groundcover for dry, shady sites; it could be planted as an alternative to English ivy (Hedera helix), lesser periwinkle (Vinca minor) or lily turf (Liriope muscari). Fruit is generally not a reliable aesthetic trait, as box huckleberry is self-sterile and requires an unrelated clone nearby to set fruit.

The only pest damage I’ve personally witnessed is minor defoliation caused by leafminer, but beyond that, there are no serious pests or diseases that affect box huckleberry.

During a six-month research internship at the U.S. National Arboretum, I conducted a propagation trial to determine which time of year was the best time for taking box huckleberry cuttings. We took softwood cuttings, dipped them in rooting hormone (Hormodin Three; 8,000 ppm IBA), and stuck them into a 50:50 peat/perlite potting soil mix on an intermittent mist bench. After six weeks on the bench, the cuttings were examined for rooting and their root length and number were recorded. This research study, among others, is part of the continuing effort by the U.S. National Arboretum to understand box huckleberry and improve its chance of becoming a successful horticultural crop. 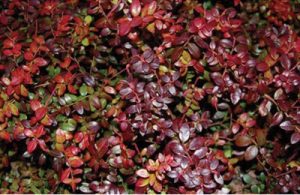 Currently, box huckleberry is not widely available in the nursery trade and the public has limited access to planting material for home landscapes. In time I hope the plant will become increasingly available and used in landscapes. Box huckleberry’s tough nature, beautiful fall color and ability to grow in dry, shady sites could make it a valuable addition to the product mix of the nursery industry. Perhaps someday this tough, attractive plant will join American gardens; until then, however, box huckleberry will await its day to shine in both public and private gardens.