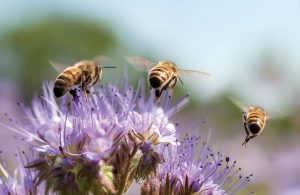 Everyone’s buzzing about it.

The Task Force that was formed in 2014 to study the plight of pollinators has just released the results of its work. (To recap: Just about a year ago, President Obama issued a Presidential Memorandum that created an interagency task force with the assignment to develop an all-encompassing strategy, designated to get to the bottom of colony collapse and to develop plans to remediate the dramatic decline of pollinators – most notably, honey bees.)

The resulting “National Strategy to Promote the Health of Honey Bees and Other Pollinators” (which can be found at http://bit.ly/whitehouse_pollinatorhealth) proposes three basic goals, including:

That’s just the tip of the 64-page iceberg, but if you work with plants, it’s a document well worth reading. The “Strategy” is accompanied by something called the “Pollinator Research Action Plan,” also a must read.

In response to the release of the government’s strategy, horticulture organizations AmericanHort, the Society of American Florists, American Floral Endowment and the Horticultural Research Institute issued a combined statement, which is provided here. (You’ll recall that Joe Bischoff, AmericanHort’s former Regulatory and Legislative Affairs Director, wrote about pollinator health in the October 2014 issue of American Nurseryman: http://www.amerinursery.com/growing/pollinators-pesticides-and-public-perception/).

We join together to welcome and embrace key aspects of the federal government’s recently announced National Strategy for the Protection of Honey Bees and Other Pollinators. The long-awaited strategy has three major goals: reducing honey bee colony losses, increasing Monarch butterfly populations, and restoring or enhancing millions of acres of land as pollinator habitat, through public and private action. As is the list of threats to bee and pollinator health, the national strategy itself is long and complex. We are studying the details, but the overall approach appears balanced and mostly sensible.

The national strategy’s overarching goals dovetail well with the focus of the ongoing Horticultural Industry Bee and Pollinator Stewardship Program. Under that initiative, we have directly funded several priority research projects, and collaborated on additional research funded by others, to provide critical scientifically sound guidance for professional horticulturists. We are developing a grower stewardship program based on best practices for protecting pollinators while managing pests. Finally, we are establishing partnerships with other agricultural, conservation, restoration, beekeeper and honey producer groups to advance the goals of improved pollinator habitat and forage.

Improved habitat and forage are properly at the heart of the national strategy. Many components of the strategy target large-scale habitat restoration and federal lands. Horticulture has a major role to play, as well. This is especially true in the context of the managed residential, commercial, and municipal landscapes of urbanized and urbanizing areas of the nation. In these areas, the best way to support honey bees and other pollinators is to plant healthy and site-appropriate pollinator-friendly plants. Professional growers of tree, plants, and flowers provide the very thing pollinators need to thrive: diverse and ample sources of forage.

With respect to activities of the Department of Interior and USDA’s Natural Resources Conservation Service, as demand increases for pollinator-friendly seeds and plants we strongly urge close collaboration with the private sector to meet growing demand. Expanded government competition with the private sector is not the answer. Finally, the Strategy itself (not including the appendices) uses the term “native” in the context of plants and vegetation more than 60 times. In many planting situations, like large-scale restorations, native plants may be the logical choice. In others, like managed landscapes or remediations, all site-appropriate, non-invasive pollinator-friendly plants should be embraced.

The strategy calls for major commitments to research. We recognize that public-private partnerships will be needed to address the myriad questions that must be addressed through ongoing research. Toward this end, we recently supported the President’s proposed budget for expanded research conducted or funded by USDA agencies including the Agricultural Research Service and National Institute for Food and Agriculture.

Finally, with respect to the Environmental Protection Agency’s pollinator protection plan, we are pleased to acknowledge the clearly stated commitment to following the science. Emotional campaigns based on anecdotes and a few flawed studies are not a solid foundation for public policy. We also acknowledge and appreciate the stated commitment to ongoing collaboration with groups such as the Horticultural Research Institute and Minor Crop Farmer Alliance. We share that commitment going forward.

We and our members stand ready to work collaboratively to advance the goals of the National Strategy.

For additional information on what horticulture needs to know about pollinator health, view our video at http://bit.ly/ProtectingPollinatorsVideo.