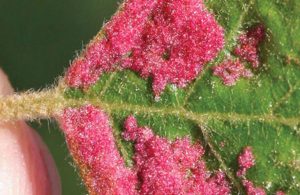 In the first installment of this series on plant galls (May 2015), we talked about the difference between gall-like structures and true galls, including bacterial crown galls, fungal galls, leaf/petiole galls, flower/fruit galls, bud galls and stem galls. Galls galore! But there’s more.

There are more than 2,000 species of insect gall-makers in the U.S.; however, three quarters belong to only two families: Cynipidae (“gall wasps”) and Cecidomyiidae (“gall midges”). Note the “cecido-” in the name of the gall midge family; Cecidology is the scientific study of plant galls. Of the over 800 different gall-makers on oaks, more than 700 are gall wasps. In other words, when trying to identify an insect gall, keep in mind that there is a high probability it was produced by a gall wasp or gall midge.

Although insect and mite gall formation is not entirely understood, researchers theorize there are two possible pathways. Some gall researchers believe certain types of plant gall growth are directed by the feeding activity of the gall-maker. The galls are produced by a combination of constant but subtle feeding irritation, perhaps coupled with the release of chemical inducers by the gall-maker. Mossy rose gall is a good example of a plurilocular, unilarval gall (multiple chambers but only one larva per chamber), while hickory phylloxera petiole gall is a typical unilocular, multilarval gall (one chamber hosting several larvae).

Certain eriophyid mites provide an example. These unusual mites are much smaller than spider mites (you need at least 40x magnification to see them); however, both types of mites use their sharp, piercing mouthparts (chelicerae) to rupture plant cells so they can feed on the contents. Only the feeding activity of some species of eriophyid mites induces gall growth; there are no spider mite gall-makers. This gall-growth pathway may explain how simple felt-like erineum patches (a.k.a. “erineum galls”) develop under the direction of a number eriophyid mite species. However, it does not explain how highly organized plant gall structures develop. <cColor:Word\_R255\_G0\_B0>

Some types of insect and mite galls are composed of complex plant structures and may include functional plant organs such as nectaries. These types of plant galls require a different gall-growth theory; one that includes the ability of the gall-maker to turn plant genes on and off as they direct plant cells to form highly organized plant structures. 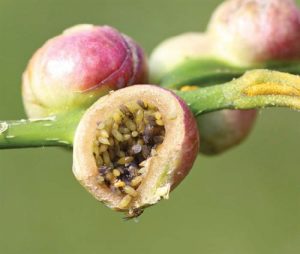 Research has revealed that some gall-making insects and mites produce chemical replicas of plant hormones, or “plant hormone analogs” meaning the molecules are nothing like plant hormones but the plant’s response is the same as with plant hormones. The gall-forming process is usually initiated by the female when she injects gall-inducing chemicals into the plant along with her eggs. The eggs themselves may ooze gall-inducing chemicals and once the eggs hatch, the interaction continues with the immature gall-makers continuing to exude chemicals to direct plant growth to suit their needs.

The resulting galls provide both a protective home and nourishment for the next generation of gall-maker. The continual direction of gall growth by the gall-maker using chemicals to turn plant genes on and off speaks to why some find insect and mite plant galls so fascinating. 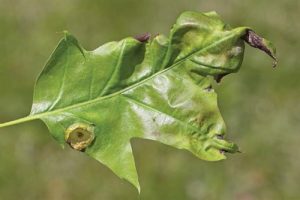 The chemicals exuded by gall-makers can only act upon meristematic plant cells, such as the cambial cells mentioned in Part 1 of this series or the meristematic cells in leaf buds; the precursors to leaf cells. Under the influence of chemicals exuded by a gall-maker, the meristematic cells that were originally destined to become leaf cells begin marching to a different drummer. Once the errant leaf cells fall under the chemical spell of a gall- maker, there is no turning back – they will become gall tissue. This means that gall formation cannot occur once meristematic leaf bud cells are committed to becoming leaf tissue; it’s one reason the leaf-gall season begins in the spring! However, once the galls start growing they will continue to grow, even after the leaves fully expand.

Stem galls that arise from cambial tissue present a different scenario. Since cambial cells remain “free agents” throughout the growing season, galls can be formed from these cells anytime during the growing season, although most stem galls also start growing early in the season to provide ample time for the gall-maker to complete its development. 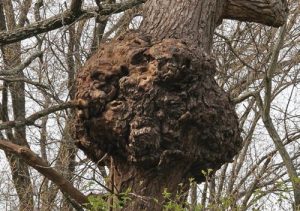 The large burl affecting this walnut is not a true gall.

Identifying insect and mite galls is challenging because of the limited number of accurate and updated gall identification resources, both online and printed. This is particularly true for galls found in North America; the European gall literature is more robust.

We’ll provide a quick recap from Part I: The first step is to consider where the gall is found on the plant. Most identification resources use the following locations: leaf/petiole galls; flower/fruit galls; bud galls; stems galls; and root galls.

Next, galls are described based on their structure such as general appearance (for example, ball-like, hairy, etc.), number of chambers, and the number of gall-makers housed in the chambers. Recall that unilocular galls have only one chamber; plurilocular galls have multiple chambers. Unilarval galls only have one gall-maker per chamber; multilarval galls have more than one gall-maker per chamber. The aforementioned ball-like larger oak apple gall is a unilocular, unilarval gall. The hairy-looking mossy rose gall produced under the direction of the gall wasp, Diplolepis rosae; a species first described by Carl Linnaeus, is a plurilocular, unilarval gall with many chambers but only one larva per chamber. 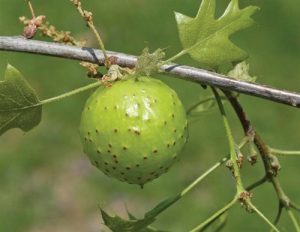 The ball-like hickory petiole galls produced by several phylloxeran species (Phylloxera spp.) are usually unilocular, multilarval galls; there is a single chamber housing many of these aphid relatives. 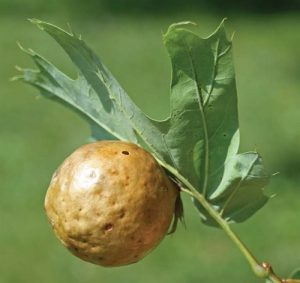 While the highly organized plant galls produced under the direction of many insect and mite gall-makers represent a wide range of forms and locations, there are certain consistencies that can be summarized as “gall laws.”

The First Gall Law: Galls are abnormal plant growths produced under the direction of a living gall-maker; they do not arise spontaneously, nor are they in response to plant wounding that does not involve a gall-maker. This law removes certain tree growth such as “burls” from the gall arena. It is believed these abnormal plant growths are the result of runaway plant hormone production; they are not considered “true galls.” The Second Gall Law: Insect and mite galls are abnormal plant structures that are composed entirely of plant tissue; they’re not part of the gall-maker. Infections by fungal plant pathogens can illustrate that insect and mite plant galls are indeed plant structures. The oak anthracnose fungus, Apiognomonia quercina, normally infects the leaf cells of its namesake host producing blackened, necrotic leaf tissue. The fungus can also infect the plant tissue of the small oak apple gall produced under the direction of the gall wasp, Cynips clivorum, because the gall is constructed from hijacked leaf cells. The resulting tissue necrosis makes the gall appear to slowly dissolve away.

The Third Gall Law: Galls can only be formed from meristematic plant tissue and once plant tissue stops differentiating, galls cannot be formed by a gall-maker. This explains the seasonality of leaf and bud galls, as well as the ability for stem galls arising from cambial tissue anytime during the growing season.

The Fourth Gall Law: Gall structures and locations on the plant are so species-specific that the species of the gall-maker can be identified by the gall structure alone without the need to see the gall-maker itself. Although galls may change color and texture as gall-makers develop, and are said to be “mature” once the gall-maker completes its development, the changes are predictable. 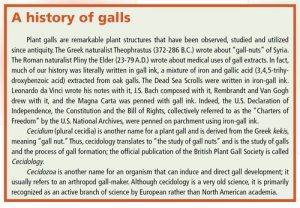 There are more than 20 different types of “oak apple” galls, so named because of their resemblance to varying sized apples. However, only one gall wasp species, Amphibolips quercusinanis (syn. A. inanis), produces the so-called larger empty oak-apple gall. The 1 to 1½-inch-diameter galls arise from leaf buds. The galls hold a single wasp larva and as the larva develops, the galls bear a striking resemblance to green apples with the apple-ruse made complete by reddish speckles that resemble insect damage to the “apples.” The galls are filled with soft fiber radiating spoke-like from a center kernel that houses the resident wasp larva. Once the larva pupates, the mature galls turn tannish brown and the fiber degrades, causing the galls to appear empty, thus the common name. 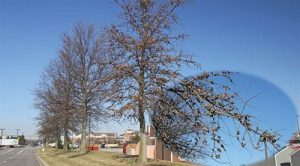 It is common to find the gnarled, woody, horned oak galls produced by the cynipid wasp, Callirhytis cornigera, affecting only a few trees in a whole row of seemingly related pin oaks (Quercus palustris).

The Fifth Gall Law: Gall-makers are specific to certain hosts. Their activity may be confined to a plant species, or certain varieties, cultivars or provenances within a species. It is common to find the gnarled, woody, horned oak galls produced by the cynipid wasp, Callirhytis cornigera, affecting only a few trees in a whole row of seemingly related pin oaks (Quercus palustris). This observation speaks to the impact of only slight genetic differences in the gall-makers’ host. Galling activity may also be confined to a group of related species within a genus. It is uncommon for gall-makers on white oaks to also reside on red oaks. What this means for gall management is that making slight changes in tree selection may eliminate a recurring gall problem in a landscape. 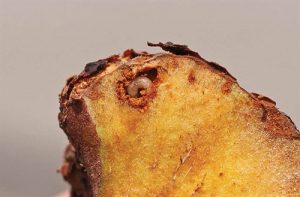 A weevil has colonized a cedar-apple rust gall.

Sixth Gall Law: Insect and mite galls may house other occupants that have nothing to do with gall formation; however, these interlopers still rely on the gall for both their lodging and food. Biologists call these gall-guests “inquilines,” a term derived from the Latin inquilinus, which means “tenant” or “lodger.” Inquilines are divided into cecidophages, arthropods that feed on the gall tissue while the gall-maker is developing, and successori, arthropods that feed on the galls after the gall-maker moves out. 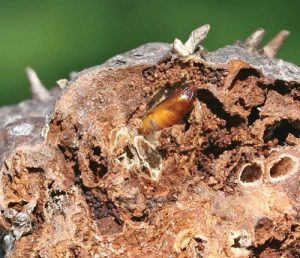 More than 20 different arthropods may wholly or partially depend upon the gnarled, woody, horned oak gall produced by the cynipid wasp, Callirhytis cornigera, for their livelihood.

Studies have shown that more than 20 different arthropods may wholly or partially depend upon the gnarled, woody, horned oak gall produced by the cynipid wasp, Callirhytis cornigera, for their livelihood. Arthropods may also colonize fungal galls, such as the aforementioned fungal black knot and cedar-apple rust galls, which may introduce some confusion as to the identity of the true gall-maker! Indeed, with the wide array of possible inquilines in some galls coupled with the predators and parasitoids that feed on the gall-maker as well as the inquilines, biologists often describe galls a mini-ecosystems; it’s a jungle in there! 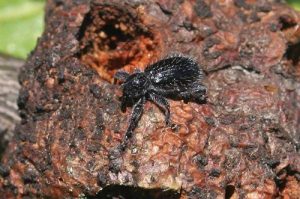 Next up: Gall management.