STAYING AHEAD OF ROSE ROSETTE DISEASE 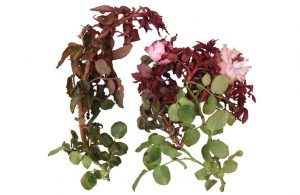 It’s been around for a while, and it appears that it’s not inclined to go away very soon. Although research is continuing, the approach, for now, remains the same.

According to Mary Ann Hansen, Instructor in the Department of Plant Pathology, Physiology, and Weed Science at Virginia Tech, the disease remains “pretty widespread, if the number of symptomatic samples we get in our lab every year is any indication. Luckily, the rose industry is working with researchers and Extension folks to try to find ways to control the disease. Hopefully breeding programs will eventually bring us some new roses that will have resistance to this disease!”

Perhaps through the work of the National Clean Plant Network-Roses program, resistant varieties can be identified (see “Keeping Roses Clean,” by David C. Zlesak, on page 16). Until then, we’ll revisit information we published last year, in hopes that more vigilant adherence to scouting and management can stem the tide of rose rosette disease. 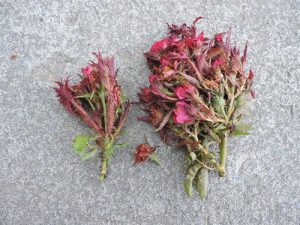 These samples display nearly every sign of the presence of rose rosette virus.

Rose rosette disease (RRD) can be tricky. Its transmission involves three players: a virus, which is vectored by an eriophyid mite (Phyllocoptes fructiphilus), and the wild and sometimes invasive multiflora rose. For rose rosette disease to be successful, those three elements must be present. To break the cycle of this disease, eliminate one of the trio. Sounds easy. It’s not.

It’s believed that all cultivated roses are susceptible to the disease; this includes shrubs, hybrid teas, floribundas, grandifloras and miniatures. So even if there’s no evidence of multiflora in the immediate area, other roses may already carry the pathogen and can transmit it to your presumably clean stock. Once that happens, removal and destruction of the affected plants is your only option. 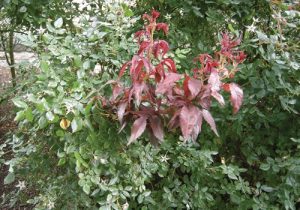 What to look for

Symptoms of rose rosette disease can be difficult to recognize and confirm, as some signs mimic normal new growth. Many rose varieties are known for their richly colored young foliage, with leaves emerging a deep red to purple in spring. These generally turn green during the growing season, so if a plant continues to display intense red foliage throughout summer, it may have been infected.

Flushes of massed, tangled growth, similar to a witch’s broom, can signal the presence of rose rosette virus (RRV). This may be more evident in plants that have been infected for more than a year. Infected plants may display unusually large masses of distorted buds, most of which fail to open. Reddening and/or flattening of the cane can occur. Excessive thorn growth is an obvious sign.

Several of these symptoms appear similar to the signs of herbicide damage – which just adds to the challenge of confirmation.

Plants infected with RRV will decline and eventually die, but the disease may not be fatal for three to four years, by which time nearby plants may have been affected. Some speculate that rose rosette disease has become widespread in recent years due to the popularity of mass plantings, positioning plants close enough together to give the mite – which cannot fly, but can “balloon” on the wind – easy access to its next victim. So vigilance is key. 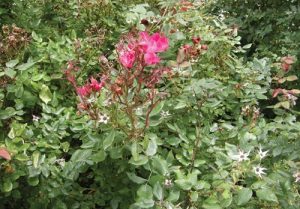 A plant struggling with RRD produces deformed buds and flowers.

How to manage rose rosette disease

Ultimately, the rose rosette virus is fatal. Once a plant is infected, it will not survive, so management of the disease is about preventing its spread to other plants.

Scouting for symptoms is vital to the long-term survival of nursery stock or landscape installations. It’s a good idea to inspect plants before they’re purchased, and take a look at neighboring plants, as well. 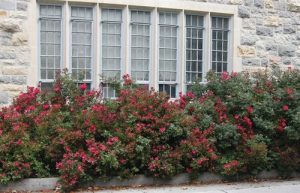 A once-lush planting that graced a building on the campus of Virginia Tech was devastated by rose rosette disease. Planted closely together, the roses had provided a wealth of blooms. Their proximity, however, likely encouraged the spread of RRV.

Although selective pruning of affected canes has been suggested as a possible means of management, this has proved – so far – to be ineffective. If signs of the disease are detected, the affected plants must be rogued. Many plants infected with RRV may remain asymptomatic; it’s a good idea to remove plants immediately surrounding them, providing a safeguard against further infection. Rogued plants should not simply be removed from the site, but bagged where they stand prior to removal.

Miticides have been suggested as possible “cure,” but to date, these methods have been unsuccessful.

A quick and dirty checklist of symptoms

Symptoms can range from what appears to be a flush of new growth to grotesque mutations that disfigure the plant. The most easily spotted signs of a rose rosette attack are:

Witches’ brooms are a sure sign of rose rosette infestation, although at first the odd growth may appear to mimic the effect of herbicide drift. Where canes overproduce thorns, the growth may be so excessive that stems are covered.

There’s an excellent online resource at AmericanHort’s Knowledge Center, including a webinar and videos that help to explain the how’s, the what’s and the why’s. Go to http://www.americanhort.com, click on “Knowledge Center” and select Be In The Know.