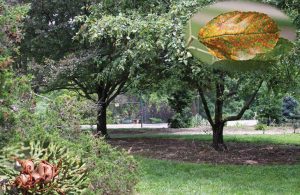 The first two installments of this series (May 2015 and June 2015) taught us that galls, while mysterious, are not to be feared. Nevertheless, they are abnormal growths, and they can be managed in order to maintain the appearance of the plant affected.

The vast majority of plant galls cause little to no harm to the health of their host plant, which means that gall management strategies aimed at limiting the impact on plant health are usually not needed. This perspective is particularly true for galls produced by insects and mites. Also, for reasons not clearly understood, populations of arthropod gall-makers tend to rise and fall dramatically from year to year. It is not unusual for a season with heavy activity by a particular gall-maker to be followed by years with almost no evidence of the gall-maker’s handiwork.

It’s all about education

An effective gall management strategy should start with educating your clients. Although galls are abnormal plant structures, they are still fascinating plant structures. Plant galls are an outward result of a complicated physiological and chemical dance between the gall-maker and the plant host. If not viewed with a sense of wonder and fascination, at least insect and mite gall-makers should garner begrudging respect. So far, no human has managed to duplicate the work so handily done by a group of organisms that are often viewed with disdain. Imagine the plant secrets that would be unlocked if we could!

Of course, the fact that plant galls may be fascinating and most cause no harm may be cold comfort to some clients, since galls certainly affect the expected and desired appearance of the host. Couple this with the reality that gall-makers are difficult if not impossible to control, and it is small wonder that plant galls are often viewed with little wonder.

Unfortunately, gall prevention is not an option for most arthropod galls based on our current knowledge and available tools. Little is known about the life cycles for many of our most noteworthy arthropod gall-makers. Almost nothing is known based on scientific research about pesticide efficacy against these gall-makers; much of what has been reported is based on anecdotal accounts. There is limited motivation for funding and conducting research aimed at adding arthropod gall-makers to pesticide labels, because the galls are seldom of economic significance and rarely cause harm to plant health.

Such is not the case, however, with black knot on Prunus and cedar-apple rust galls on juniper. Properly timed fungicidal applications may be helpful in preventing gall formation. There are also other management options. As noted previously, the black knot fungus will re-infect galled trees, but it takes around two years for infectious spores to be released from newly developing galls. Pruning and destroying new galls before they release spores can be helpful in managing the galls.

Planting other members of the Prunus genus near an infected tree could be a prescription for expanding a black knot problem. Knowing that the cedar-apple rust fungus requires two hosts, juniper and apple, to complete its development coupled with knowing that the galls on junipers arise from spores from apple means that keeping the two hosts apart is an important first step in gall management. It may not entirely prevent the problem, since spores may drift considerable distances; however, it would certainly be helpful. 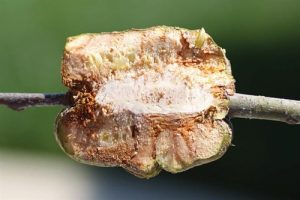 As it begins to develop, an embedded horn can be seen protruding from the top of this immature horned oak gall.

The complicated life cycle of the horned oak gall wasp presents a special gall management challenge. The wasp alternates between sexual and asexual reproduction between generations, a condition called heterogamy. The wasp also produces two entirely different types of galls between generations. One generation of wasps develops from insignificant leaf galls that appear as small bumps on leaf veins; the galls are difficult to detect with an untrained eye. Leaf gall growth starts in the spring and wasp development within the galls, from eggs to adults, takes about three months. This is the “sexual” generation, so both male and female wasps emerge from these leaf galls. Once they mate, the females fly to twigs and small branches to start the next generation of wasps that will develop in stem galls.

The females’ egg laying activity stimulates the growth of stem galls from cambial stem tissue. The sizes of the galls depend on the number of eggs laid; larger galls hold more eggs and resulting wasp larvae. The larvae spend 33 months in individual chambers within these very obvious gnarled, dark green, woody stem galls. The galls grow larger in size with each season. As the immature wasps near the completion of their development, the whitish-tan, cone-shaped “horns” that give this gall its common name begin to extend from the gall. Adult wasps emerge from the horns once they are fully extended. This is the “asexual” generation; all of the adults are females, there are no males in this generation. This form of asexual reproduction, where females do not require fertilization by males to produce fertile eggs, is called “parthenogenesis.” <cColor:Word\_R255\_G0\_B0> 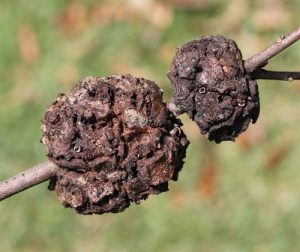 Old horned oak galls have been abandoned by their wasp gall-makers.

Management strategies for the horned oak gall wasp must take into account the two locations where the gall-maker resides. Adding to the complexity is that nothing is synchronized. Leaf galls occur every year providing a constant stream of wasps producing new stem galls. The annual reservoir of wasps dedicated to producing stem galls makes managing horned oak gall by pruning out infested stems a never-ending process. In the late 1990s, horned oak gall was the target of one of the most complete insecticide efficacy trials conducted against any insect gall-maker. The trials were performed at the University of Kentucky by Dr. Eileen Eliason ((Buss); now at the University of Florida) and Dr. Dan Potter. The researchers reasoned that the leaf-galling generation may be the “weak link” in the wasp’s life cycle relative to insecticide suppression owing to the annual initiation of new galls and the location of the wasp larvae in small, vulnerable leaf galls. The researchers made foliar applications of contact insecticides targeting females as they laid eggs. Wasp larvae inside leaf galls were targeted with foliar applications of translaminar systemic insecticides and trunk injections of concentrated solutions of systemic insecticides.

Their results revealed an insecticide conundrum related to an unintended consequence that is not unique to controlling insect gall-makers. All of the application methods and most of the insecticides used in the trial provided a significant suppression of the horned oak gall-maker. However, the insecticide treatments also had a severe impact on beneficial parasitoids, which accounted for about a 70 percent mortality rate of the leaf-galling generation in the untreated “control” trees. In other words, while insecticides were proved to be effective, the unintended consequence was to kill the very beneficial insects that could account for a natural reduction of the gall-maker almost equal to the insecticides! 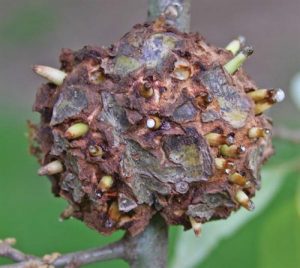 As immature wasps near the completion of their development, the whitish-tan, cone-shaped “horns” that give this gall its common name begin to extend from the gall. Adult wasps emerge from the horns once they are fully extended.

Ephraim Porter Felt best expressed the wonder of plant galls in his pivotal 1917 New York State Museum publication (No. 200), “Key to American Insect Galls.” Felt stated: “Insect galls are obvious and frequently excite surprise because of the strange form or the wonderful coloring and delicacy of structure.” Such strong appreciation for plant galls has influenced many scientific careers.

Alfred Kinsey (yes, that Alfred Kinsey) investigated gall wasps to earn his Doctor of Science degree from Harvard University in 1919. His fertile research reports and fruitful collecting spawned a greater understanding of the evolutionary relationships among gall wasp species (phylogenetics). Of the 18 million insects in the New York Museum of Natural History’s collection, 5 million are gall wasps collected by Kinsey. There is no doubt that his stimulating work aroused others to pursue scientific research on plant galls. However, the allure of gall wasps did not hold Kinsey’s attention for long; he later went on to pursue other thought-provoking research at Indiana University.

Kinsey’s long scientific career started with plant galls. It just shows that you never know where a healthy interest in plant galls will take you!

All photos courtesy of Joe Boggs