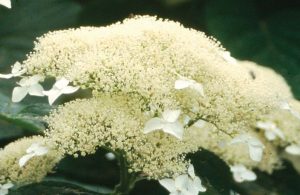 They started out as liners, scrawny little sticks with scant visible potential, but there was room at the fence for filler, so into the soil they went. I’m a fool for hydrangeas and will take practically any opportunity to try another, despite the lack of decent soil and sun exposure in my postage-stamp back yard. The routine? Dig, plant, hope for the best.

Lo and behold! A few months’ worth of neglect later, I got the best.

White Dome hydrangea (Hydrangea arborescens ‘Dardorn’; smooth hydrangea) has been a consistent and reliable performer for more than 15 years, growing robustly each spring from a drastically pruned crown (about 6 to 12 inches tall) to a lush, fully rounded shrub that reaches nearly 5 feet tall and wide. Though its branches are relatively slender, they stand strong and proud, sporting dark green foliage that shows pale green undersides in the slightest breeze and remains clean throughout the season. The elliptic leaves, some reaching 6 to 8 inches long, are toothed, although not dramatically so. Fall color, at least in my experience, is inconsequential.

Dome-shaped, lacecap-type inflorescences emerge a light green in spring, developing to white or off white; fertile flowers are occasioned by a few sterile flowers—rarely are there enough to qualify as a true lacecap. The large

infloresences often expand to nearly 10 inches in a good year; more commonly, they reach 6 to 8 inches across. Still, even the largest blooms have yet to bend the plant’s stems.

White Dome blooms on new wood, so an enthusiastic pruning is called for. I’ve cut mine back both in late winter and well into spring with similar results: vigorous growth and long-lasting performance.

The site I chose for my plants receives an hour or two of morning sun, followed by dappled shade, and they’re very happy. I did little to improve the poor, clay soil, but the plants seem to thrive and grow more robust each year. Smooth hydrangea is tolerant of a range of soils, including clay, dry, wet, rocky, shallow … and these plants prove that point. They require precious little maintenance, although they’re excellent canaries in the coal mine when it comes to droughty conditions. They’re among the first to droop slightly— that’s my signal to haul out the hose and give them a decent drink, and they’re satisfied. This happens rarely, however, and there have been several seasons during which they thrived on rainwater alone. On the other hand, they do well when it’s ridiculously wet, and don’t mind standing water.

The species suffers very little from serious insect or disease problems; occasional bouts of bacterial wilt, leaf spots, rust and powdery mildew may occur. For one reason or another, I’ve been lucky and have observed only an occasional perforated leaf. This is rare, and I’ve seldom seen insects (other than a few bees); even the rabbits that inhabit my garden don’t bother. 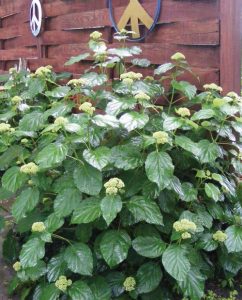 White Dome is not a spectacular plant; there’s little pizzazz and the color is simply pleasing. That’s not to say it’s not beautiful. There’s tremendous value in a plant that loves to perform, day in and day out, season after season. In my garden, that’s saying a lot.