THE ROAD TO IMMIGRATION REFORM For far too long, immigration reform has been bandied about in the halls of Congress, the pros and cons of the issue bouncing back and forth like a ping-pong ball. Hints of progress have been offered, but a truly workable system has yet to be achieved.

We asked Craig Regelbrugge, AmericanHort’s Senior Vice President for Industry Advocacy and Research, for his take on the status of immigration reform. For 25 years, Regelbrugge has served as the industry’s eyes, ears and voice on The Hill. He co-chairs the Agriculture Coalition for Immigration Reform (ACIR) and is uniquely positioned to fill us in on where we stand — and where we’re headed.

American Nurseryman: The House Judiciary Committee recently approved a bill called the Legal Workforce Act, which is intended “to amend the Immigration and Nationality Act to make mandatory and permanent requirements

relating to use of an electronic employment eligibility verification system [and for other purposes],” meaning E-Verify. What does the bill entail, and how will this affect nursery and landscape employers?

Craig Regelbrugge: If enacted into law, the bill would require all employers to use the E-Verify program within three years. Concerns for our industry are on two levels. On the more technical side, the question is whether E-Verify works? The short answer is yes, generally, though there are errors in the federal databases the program relies on, and E-Verify is prone to wrongly approving false documents that feature a legitimate name and number combination.

AmericanHort also has concerns that E-Verify may be especially challenging in industries like horticulture, with high seasonal hiring and turnover, sometimes limited access to high-speed Internet, lack of dedicated human resources staff, and sometimes remote hiring. With our encouragement, the E-Verify program staff has been exploring a smartphone app platform that would provide a simpler interface.

On the bigger policy level, E-Verify will devastate the industry’s labor force unless it is accompanied with other immigration and visa reforms. The situation is most serious in seasonal employment and in agriculture, where an estimated 70 percent or more of the labor force lacks proper work authorization. If E-Verify works as intended, it would exclude a majority of the experienced labor force from being hired. We believe E-Verify legislation must be paired with reforms that stabilize the labor situation and provide better future employment visa programs. 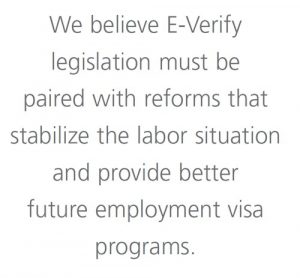 American Nurseryman: In November, President Obama issued an executive action on immigration policy that offered temporary legal status to illegal immigrants, in addition to an unspecified reprieve from deportation. In February, a federal judge in Texas issued a temporary injunction to stay the action. Please briefly explain the intent of the action, as well as the injunction.

Craig Regelbrugge: President Obama’s executive actions included measures to reprioritize and redirect enforcement resources toward the southern border and criminal activity. Those measures still stand. Of more direct interest to employers, Obama also moved to modestly expand the already-established “deferred action for childhood arrivals” (DACA) program, and to establish a new “deferred action for parents of Americans” (DAPA) program. Unless blocked in the courts, DAPA will allow individuals who have been present in the U.S. for at least five years and who have a child who is a U.S. citizen or permanent resident and who pass a background check to apply for a deferral from deportation for three years, with a general authorization to work.

Upward of four million individuals may qualify. Bear in mind this is not really “legalization,” but rather a temporary 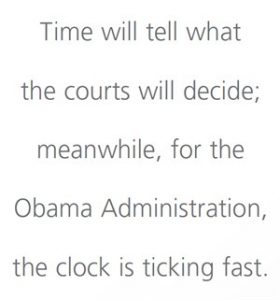 relief from being deported. No one knows how many would actually choose to apply. The incentive is the prospect of legal authorization to work and “come out of the shadows.” The risk, of course, is putting your name on the deportation list with no guarantee that the policy will stand, and will ultimately lead to something better and more permanent.

Twenty-six states joined to challenge the executive actions. The Texas judge’s injunction is not a ruling on the merits of the case, but rather a temporary roadblock based on procedural grounds (that the President’s actions did not follow the notice-and-comment rule making requirements of the Administrative Procedure Act). The case will surely end up in federal appeals court and could wind up at the Supreme Court. Time will tell what the courts will decide; meanwhile, for the Obama Administration, the clock is ticking fast.

American Nurseryman: In the 2014 elections, the Republican Party gained the majority of seats in Congress. What does one-party control mean for immigration legislation?

Craig Regelbrugge: If the Republican Party were unified, it could easily move immigration reforms through the House. The Senate would be more challenging, since Mitch McConnell’s majority is six seats short of 60, the number typically required to overcome key procedural hurdles there.

But the big story is Republicans are anything but unified. Some see immigration as an economic issue. They may have agriculture or tech or other affected industries in their districts. They support sensible reforms that they believe will positively contribute to the economy. At the other end of the spectrum are the enforcement-only hardliners. There are probably at least two-dozen Republicans who will oppose any sensible or balanced reforms. In the middle are a large number of members who know the system is broken, but they are nervous about facing a political challenge from the right.

These complicated dynamics mean nothing is likely to pass unless it has a decent measure of bipartisan support. But that means compromise. And compromise itself has become a dirty word for some. If Congressional leadership can be persuaded to move, our challenge will be helping to find the legislative “sweet spot” that can muster the votes to pass (and avoid a Presidential veto).

American Nurseryman: In a nutshell, what’s the current status of long-awaited immigration legislation? Will significant progress be made before the 2016 elections, or will a new administration inherit the debate?

Craig Regelbrugge: Hope springs eternal, but the environment is very challenging. Added to what I’ve already said is the “O Factor.” Many Republicans are so frustrated over what they see as this administration’s lack of accountability, that they will refuse to seek common ground. Serious reform may not happen before a new president takes office. But, we cannot disengage or we’ll lose the position we have achieved through years of hard work.

American Nurseryman: How is AmericanHort working to advocate for immigration reform?

Craig Regelbrugge: For years, AmericanHort (and previously, ANLA) has done the tireless political work to educate Members of Congress and build grassroots support for reform. It’s an ongoing job, given that we’ve got a new Congress every two years and a new crop of elected officials. We co-chair the Agriculture Coalition for Immigration Reform, and the H-2B Workforce Coalition. And, we continue to be recognized by the mainstream media as a go-to voice for perspective on the issue.

American Nurseryman: What action can green industry professionals take to help ensure that legitimate and workable immigration reform is achieved?

Craig Regelbrugge: As they say, all politics are local. The real power is in the hands of the voting constituents. Horticultural employers have an added measure of power and credibility, because they are job-creators. So the task is educate, educate, educate! Though it’s good to come to Washington, it’s not essential. Make it part of your business plan to build a relationship with your U.S. Senators and Representatives and their staff. Join with like-minded businesses to host a tour. Enable your key employees to engage in the political process, too. I think reform is inevitable, it’s really just a question of when and what. Making sure the “what” is “soon and good and wise” is up to each of us!