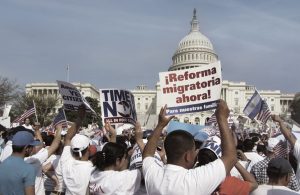 “It’s going to get worse before it gets better.”

With respect to the horticulture industry and our tenuous labor situation, this simple and time-worn phrase captures the essence of the challenges that lie ahead.

The available statistics, commissioned by the federal government and derived from ongoing surveys, confirm the facts suggested by the more informal narrative of our industry’s growers, landscape professionals and others. The production labor force is aging. It is more settled, more rooted. A large percentage of the workforce (at least half, in the case of agriculture, nursery and greenhouse) is believed to be unlawfully present and unauthorized to work in the U.S. And, this workforce is vulnerable to attrition – aging out, leaving to work in construction, displaced by immigration enforcement.

As production labor challenges grow, more employers have turned to the limited seasonal visa programs now available to them. Use of H-2A, the agricultural program, has literally doubled since 2011, with roughly 166,000 jobs certified by the Labor Department to be filled by a foreign worker in 2016. Of course, that’s still less than 10 percent of agricultural labor need, but the number is growing and the bandwidth of the program is strained.

The H-2B program has been capped by Congress at a laughably low level, and the cap is being hit rapidly this year. Landscape businesses are the single largest user of the program, and our industry may find itself 10,000 workers short – perhaps twice that number – during peak production season. Congress has been on the sidelines, waiting for a signal from the White House.

How to make sense of all this? Well, in a sense, there are two President Trumps. One is the successful businessman with a global enterprise. Here at home, he is an H-2 program user – the ag program at a vineyard he owns in Virginia, and the B program at his Mar-A-Lago resort compound. Plus, he’s a builder, a hotelier. Surely he understands this issue from an employer’s perspective!

The other President Trump has surrounded himself and given voice to a cast of nativists and immigration restrictionists who have steadfastly opposed virtually any and all efforts to resolve our nation’s immigration dilemmas from the political middle, where compromise, common ground and solutions are to be found. These individuals have a long history of opposing illegal immigration (which truthfully none of us is “for”); they have also opposed legal immigration, and the temporary, non-immigrant programs that are a lifeline for many in our industry.

Immigration reform now may seem like a dream, having been No. 1 on the wish lists of several industries for, well, decades. Legislation has been proffered again and again, each time either being shot down in committee or never even making it that far. And each time, it seems the “facts” and figures are malleable, depending on who’s debating and who’s for or against.

So we turned to Pew Research Center, a nonpartisan “think tank” (of sorts) that conducts public opinion polling and performs demographic and social science research. It’s considered to be among the least biased of information sources, offering data rather than opinion, and concentrating on reporting measurable statistics.

In a March report titled “What we know about illegal immigration from Mexico,” Pew states that among unauthorized immigrants in the U.S., there was a decline in the number of those coming from Mexico, but an increase in immigrants from other countries since 2009. The report makes the following points:

The number of Mexican immigrants living in the U.S. illegally has declined by more than 1 million since 2007. Despite the overall decrease, Mexicans still comprise about half of the country’s 11.1 million unauthorized immigrants (52 percent in 2014).

There were more non-Mexicans than Mexicans apprehended at U.S. borders in fiscal year 2016, for the second time on record. In 2016, 192,969 Mexicans were apprehended at the border, reflecting a dramatic decrease from the peak of 1.6 million apprehensions in 2000.

These individuals, steps from the President, were the architects of a series of Executive Orders now shaping the new administration’s immigration policy focus. The operative guidance dramatically broadens the targets for removal; agents are given wide latitude to arrest not just criminals but anyone they deem “a risk to public safety or national security.” Just about anyone unlawfully present is subject to removal. Other policy revisions, plus the call for 10,000 additional immigration enforcement agents, drastically increase the likelihood of much more intense scrutiny on the workplace. This could mean raids, or I-9 paperwork audits. In either case, expect further workforce attrition.

From a personal perspective, I felt a deep sense of foreboding when candidate Trump spoke of “murderers and rapists” pouring across the border. First, this narrative didn’t align with my richly informed professional understanding of the situation: Our southern border is as secure as it has been in my lifetime, the Obama administration truly had deported record numbers of mostly criminal aliens, and our better future with Mexico is a shared future, one in which we cooperate on security, and on labor mobility.

It’s certainly true that there are “bad hombres” everywhere. They come in all shapes, sizes, hues and creeds. But I know Mexico and I know many Mexicans both there and here, legal and unauthorized. Most are good people, with a strong work ethic and equally strong family values. Their spirit and their labor have helped to build our country – and our industry. They have enabled our success. As a friend in the dairy industry puts it, “We stand on their shoulders.”

I’m not sure which troubled me more – the act of scapegoating, or the degree to which the message appeared to resonate among too many fellow countrymen. In this increasingly anxious and chaotic world, populism, nationalism and isolationism are not (in my humble opinion) the qualities or strategies that should define the vision of our America. The world desperately needs our leadership.

The President wants 4 percent growth. That’s a laudable goal, and one that cannot be reached by shrinking the labor force. In fact, the U.S. once tried to “raise American employment and wages in agriculture” by restricting the foreign labor supply that sustained the industry. The year was 1964. The architects of the plan were not restrictionist conservatives, they were Democrats.

But when the Kennedy and Johnson administrations ended the bilateral labor agreement the U.S. had with Mexico, a recent study reported in The Economist documents that neither American worker employment in agricultural jobs, nor farm wages, perceptibly rose. Farmers adjusted, of course. They reduced plantings, switched to mechanized crops, embraced technology. Today, the effort to restrict the foreign labor force in agriculture will prompt the offshoring of much of our food and horticultural production. Canada, Mexico and others will warmly embrace the result.

There are many reasons to expect some pro-business and pro-growth policies out of the Trump administration. Policy shifts may loosen the choke collar of regulation and, over time, increase demand for our products and services.

On the labor and workforce question, it’s a coin toss whether the restrictionists or the economic perspectives in the White House prevail. I’m actually a bit optimistic about the medium-term. Moreover, regardless of which candidate you supported, there’s an uncomfortable truth: A President Hillary Clinton would surely have wanted to sign immigration reform into law. We could have negotiated a workable resolution. But, the GOP Congress would have never given her the chance! “We can’t trust her,” would have been the mantra from day one, and for four years.

So, we play the hand we have been dealt, with the goal that “Trump the businessman” ultimately prevails.

For the time being, the prudent business owner will ensure the proverbial house is in order, and will plan for labor crisis contingencies. At AmericanHort, we are counseling our premium members (who are the industry’s advocacy leaders) on how to comply and prepare. If you are not yet an AmericanHort member, and preferably a premium member, please join us. There’s no time like the present, as we work to set the stage for future progress. If you are sitting on the sidelines, you will get what you will get.