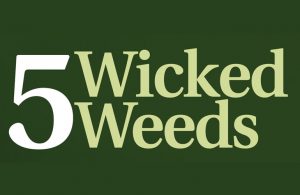 They’ll emerge when you least expect it, or maybe right on time. Perennial and annual weeds in the landscape and in nursery production can cost in resources consumed, hours logged and plant quality reduced. Getting ahead of them — or stopping them in their tracks — saves not only all of the above, but it gives you peace of mind. The first step? Identification. We’ve highlighted just a few wickedly stubborn weeds that look like wildflowers here.

Among the most common and persistent of perennial landscape weeds is Plantago major, the broadleaf plantain — no, not the banana relative. It’s easily recognized by its basal rosette of leaves that are generally smooth and broadly to narrowly oval, bearing a resemblance to those of spinach. There’s no visible aboveground stem, so the low-lying weed can be somewhat difficult to pluck if hand-weeding is attempted. A short taproot is present, but unless the entire root is pulled, this perennial will spring back up in no time.

The semi-erect stems of Lotus corniculatus (birdsfoot trefoil) spread up to 3 feet long, growing from a rugged, dense crown. This tangle of a perennial plant forms a sturdy mat from stolons and rhizomes. Alternate, compound foliage is composed of five oval to rounded, smooth margined leaves; on each compound leaf, there are three larger leaflets at the terminal and two smaller leaflets near the stem.

Bright yellow to golden yellow, pealike flowers, which sometimes are delicately streaked with red, gather in flat-topped clusters at the ends of long stalks. Fruit comprises several cylinder-shaped pods that are formed in the shape of a bird’s foot. Each capsule holds several oval to round, shiny, dark olive to black seeds.

The elongated, narrow leaves of Rumex crispus (curly dock) form a low-growing rosette; each leaf emerges somewhat oval to rounded and then stretches to form a lance-shaped leaf that sports wavy margins.

The perennial plant bolts prior to flowering, unbranched — and it can reach 3 to 4 feet in height.

Clusters of small, greenish flowers bloom on the upper stems, maturing to a deep, reddish brown. A single seed is enclosed in a shiny, reddish brown, three-sided fruit. Smooth, erect stems have multiple branches and may reach up to 12 inches tall.

Although it’s an annual, Senecio vulgaris (common groundsel) is capable of producing multiple generations each year, making control rather like a game of whack-a-mole. Variably shaped leaves emerge in alternate arrangement and can be sparsely hairy to smooth, with margins that appear smooth to slightly wavy. Older leaves bear deep, irregular lobes and coarsely toothed margins.

Clusters of several yellow, cylinder- to cone-shaped flower heads appear at the ends of stems, opening to reveal small, rayed, golden yellow, daisylike flowers. At maturity, a puffball-shaped seedhead develops — somewhat resembling that of a dandelion — and each small seed is then windborne. 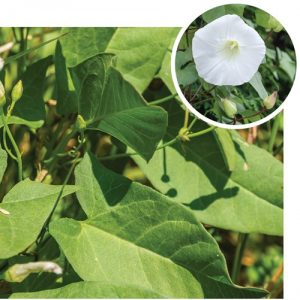 This lovely plant is proof that some of the worst thugs are among the loveliest in appearance. Convolvulus arvensis (field bindweed; morning glory) is a twining, creeping perennial vine that invades and doesn’t let go. It climbs, it creeps, it trails up to 6 feet or more, and slender stems break easily, making removal difficult.

Alternate, arrowhead – to spade-shaped leaves grow to about 1 to 2 inches long.

The easily identified, funnelshaped, morning glory flowers generally are white but may blush slightly pink; each flower has two leafy brackets about 1 inch below the flower base. Fruit appears as egg-shaped capsules containing small gray, brown or black seeds.