Not all mineral nutrient disorders, especially nitrogen, phosphorus and potassium deficiencies, are common in the landscape. However, according to University of California researchers Costello, et al., when they do occur, “in nitrogen deficient broadleaf plants, older leaves become generally chlorotic (uniformly yellowish green), while young leaves may retain their typical green color.” In other words, both leaf veins and the tissue between veins turn yellow on older leaves. The plant growth is stunted. With severe nitrogen deficiency, the entire plant might turn yellow: Note the overall yellowing of older needles in lodgepole pine (see photo, opposite). 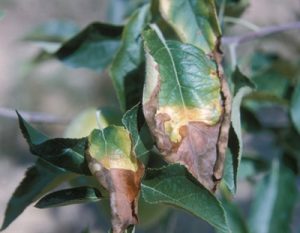 Symptoms of magnesium deficiency in plants include interveinal chlorosis in older leaves, curling of leaves along margins, and marginal yellowing, with a green “Christmas tree” area along mid-rib of leaf. This green “Christmas tree” look is unique: While the rest of the leaf looks chlorotic, the shape of green area is pyramidal and – as the description implies – resembles a Christmas tree.

Other causes of plant stress

There are other factors that mimic nutrient deficiencies. Drought stress, root damage and herbicide applications can cause the plants to develop symptoms that mimic mineral nutrient deficiencies. This is when it is very helpful to identify the plant(s) first, have a past history of the plant(s), and think like a detective.
In addition to deficiencies, plants can also develop toxicities. Toxicities of mineral nutrients are more difficult to diagnose because excessive nutrients tend to cause salt burn. Landscapers or nurserymen should refer to their records to confirm the fertilizer amounts and air temperatures when the materials were applied. Over-application of a recommended fertilizer could cause toxicity. Fertilizer applications when air temperatures are very high could also lead to a “fertilizer burn.” Again, plant tissue analysis will reveal if the nutrient concentrations are in the toxic range.

Mineral nutrient disorders usually can be diagnosed with visual symptoms:

Soil and tissue tests can be very useful tools when diagnosing nutrient disorders. There are also quite a few good books and websites. It is important to know the plants and soil conditions. The proficiency for diagnosing mineral disorders can be mastered relatively quickly.

Plants deficient in sulfur show a pale green coloring of the younger leaves, although in severe cases the entire plant can appear pale green and stunted. Because sulfur is a component of proteins, its deficiencies are similar to those of nitrogen. The difference between sulfur deficiency and nitrogen deficiency is that sulfur is immobile in plants. Hence, new growth suffers first when sulfur levels are too low.

Among all micronutrients, iron and manganese deficiencies are relatively common. Iron chlorosis is a common problem in pin oak, river birch and sweetgum trees. Iron deficiency is characterized by yellowing of leaf tissue between veins and occurs when plants are unable to acquire enough iron from the soil. Because iron is immobile in plants, older basal leaves remain green as young leaves become chlorotic between veins. Iron deficiency can be caused by low iron concentration in the soil or limited availability under alkaline soil conditions. Iron is needed for the production of chlorophyll and without it, the leaves lose their green color. If uncorrected, affected twigs and branches may die. If severe enough, iron deficiency may lead to the death of the tree. 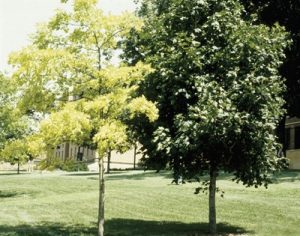 Treatment options for iron chlorosis include: foliar sprays of the canopy with an iron solution; an addition of chelated iron to the soil; applying sulfur to the soil to lower pH; and trunk injections of iron solutions. A foliar spray is a quick and temporary fix for the problem, and trunk injections are also temporary solutions. Lowering soil pH is more permanent. However, it is quite difficult to maintain a lower soil pH in the upper 12 to 18 inches of the soil where the majority of the trees’ feeder roots are located, because of the potential for the soil’s buffering capacity. Another, more realistic approach is to add chelated iron into the soil by drilling holes to increase the concentration of available iron. A soil test will be needed to determine soil pH; a leaf or tissue test will provide definitive proof.

Symptoms of iron deficiency closely resemble those of manganese deficiency. In a manganese-deficient broadleaf plant, new leaves become yellow with wide green bands. As the element concentration decreases, interveinal necrotic spots develop. In some plants, leaf margins may be wavy, crinkled or curled; shoot growth may be reduced.

Dr. Gary Gao is an extension specialist and associate professor with Ohio State University Extension South Centers in Piketon, Ohio. Dr. Gao can be reached by email at [email protected] He has taught classes, and written articles and fact sheets on soil fertility and plant nutrition, and is the editor and a co-author of “Midwest Home Production Guide,” which can be purchased from Ohio State University Extension’s eStore at http://estore.osu-extension.org.