Creating sound shade tree structure in a production nursery can be accomplished with appropriate pruning.

The strongest form for large-maturing shade trees develops when branches are spaced along one dominant trunk.
PHOTOCOURTESY OF BRIAN KEMPF

Proper pruning and training of young, large-maturing trees has a significant impact on their future growth. Arborists and urban foresters know that young trees properly trained in the nursery with a dominant leader (Photo, left) survive storms better and are likely to live longer in the landscape than trees that are not trained, or those that are improperly pruned. In addition, trees with one dominant leader can be limbed up easily to create clearance for vehicles; whereas those with multiple leaders are difficult to prune. The nursery industry recognized this with the publication American Standard for Nursery Stock (ANSI Z60.1 1990), which calls for a dominant leader in large-maturing shade trees. Some states have adopted more detailed standards or specifications for nursery trees that also call for a dominant leader; these include Grades and Standards for Nursery Plants, Florida Department of Agriculture (1998) and Specification guidelines for container grown trees, Urban Tree Foundation, Visalia, Calif.

For a number of years, leaders in the nursery industry have trained their large-maturing shade trees to one trunk. There appears to be growing consensus among green industry leaders that a dominant leader is the most appropriate method of growing shade trees.

Second to placing a tree in an appropriate location and planting it correctly, pruning has the biggest impact on longevity. Landscape managers should know that planting well-structured nursery trees makes it easier for them to complete the job begun in the nursery of developing structurally sound trees.

The main objective of pruning in the nursery is to create strong trunk and branch structure by guiding the tree’s architecture. You minimize the growth-retarding effects of pruning by removing the smallest amount of living tissue at any one pruning, while producing a strong-structured, healthy tree with a functional and pleasing form. For most trees, this is accomplished by developing and maintaining a leader early in the life of the tree (one year old is not too soon), and pruning at regular intervals when the tree is young. A regular pruning program prevents branches from growing too big too fast and outpacing the leader. 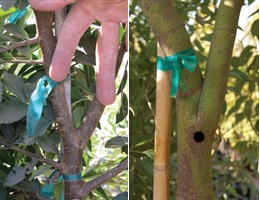 Photo, right. his maple split in halfbecause the tree forked in the nursery into twocodominant stems with an inclusion in the union.This could have been prevented with simplepruning. The included bark can be seen as thedarkened tissue at the top of the tear in the trunk.

There are three types of pruning cuts designed to develop a strong structure in trees. A “reduction cut” removes an upright stem back to a live lateral branch no smaller than about half the diameter of the cut stem. A “removal cut” removes a side branch back to the collar on the trunk. Correctly executed removal cuts close in a circle, not an oval. The third type, a “heading cut,” is made back to a bud or between branches and, along with the reduction cut, is used to slow growth on the cut branch. Heading and reduction cuts usually initiate sprout growth from behind the cut.
It is never too early to begin pruning to subordinate or suppress growth on codominant stems (Photo, above). Each time you subordinate a stem or aggressive branch, growth rate is slowed on the cut stem or branch in proportion to the amount removed. This allows the stem that was not cut to grow faster and to dominate. More light reaches branches that were previously shaded above the cut, and these will grow to fill in the void created by the removed branches. If you are leaving large gaps, you may have waited too long to prune or you are removing too much of the stem or branch. 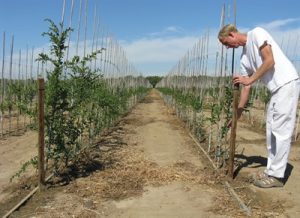 Low branches left on the trunk of young trees increase trunk caliper and root growth. A small test on 20 trees in the left row showed the grower that retaining low branches on the trunk increased growth rate and caliper compared to stripping the trunk of branches too soon (right row).

In many cases, the reduction cut is the cut of choice for creating sound structure in young trees, although heading cuts are also appropriate on certain young trees. It is important for pruning crews to follow up heading cuts with the pruning required to generate a leader (described later). Individuals of a species present many different situations to you and your crews. Each is unique and requires that workers understand the objective of training and pruning; for example, creating a dominant leader. Individuals of a cultivar have a more consistent form, making it easier to teach crews how to create a field of uniform trees.
Lower, shortened branches left on the trunk increase caliper and root growth (See photo, page 7). When lower branches reach about 18 to 24 inches long, cut them back to about 6 inches long or remove the largest several at the trunk. This will force more growth up into the canopy where you want it. Remove them back to the trunk as they approach the diameter of your pinky finger. In short, the more foliage on the trunk, the faster the growth rate and the sturdier the root system. But do not let these branches get out of hand or leader growth will be suppressed. Removing lower branches too soon forces too much growth in the canopy and can lead to a top-heavy tree that can not support itself in the upright position. All lower branches can be removed several months (southern U.S.) to a year (northern U.S.) before selling the tree so wounds close over. 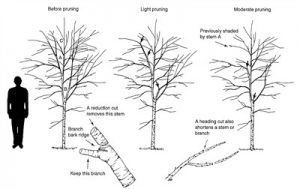 Branches and stems are subordinated lightly or moderately with reduction cuts where possible (shown) or heading cuts if necessary to allow the portion of the tree not cut-typically the trunk-to dominate the structure. Reduction cuts were made at the arrows.

Notice that the 8 to 10-foot-tall tree resembles a cone (the canopy) sitting on top of a cylinder (lower temporary branches) (Figure, left). This analogy might be an easy way to teach the concept to your crews. Many large-maturing shade trees can be trained in this manner to develop a finished product quickly. Suppress branches larger than half the trunk diameter by routine shortening or removal. 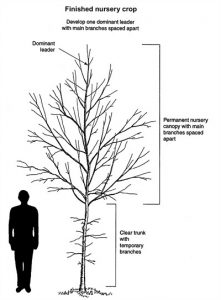 Finished shade tree with a balanced canopy around a dominant leader showing some retained low branches to protect the trunk.

Trees such as Chinese pistache, goldenraintree, jacaranda, Kentucky coffeetree, some elms and others may not branch effectively on new growth. The leader may grow very long, way beyond the rest of the canopy. Branching can be enhanced by heading the leader just prior to or during a growth flush at a point (no more than about one year old wood) where a branch set is needed (Photo, below). Several weeks or a month or two later, depending on the growth rate, select the most vigorous, topmost sprout from the cut as the main leader. Secure it to a stake if needed (See photo, page 10). Head others so they remain less dominant. You can head the main leader more than once in a growing season if the tree continues to grow through the season (Figure, right). You literally build a tree in this manner. This is commonly done in many wholesale nurseries and is an accepted practice as long as the nursery follows up by pruning to a leader. A sprout from the headed leader should be dominant with terminal bud intact and competing sprouts subordinated prior to sale. Trees with a headed leader that has not sprouted are typically not ready to be planted in the landscape.

One sprout is secured to a stake (shown); others are cut back so they branch and do not compete with the leader

(cutting back not shown).

Some nurseries head every tree very aggressively, and this is not necessary. The entire canopy turns into a mess of sprouts in the landscape, making it very difficult to maintain good structure. Although these trees can be fixed by a skilled arborist, it makes their job more difficult. In addition, many trees are not pruned much after planting, so the poor form that results from too much heading can result in branch breakage.

The above techniques work best on trees that are healthy, because trees must be vigorous in order to respond predictably. This means that irrigation, fertilization, pest control, root pruning and weed control must be managed well before beginning a pruning program. Tree spacing also plays a key role. If trees are too close together, lower branches will be starved for light and trees will grow too tall. It will be nearly impossible to maintain lower branches on the tree, trunks will be weak, and your efforts will be wasted.

Gather clues from the tree to determine when and how it should be pruned. Think ahead. Develop one dominant leader on large maturing trees. The sooner you shorten or remove a double leader or a branch with bark inclusion, the better. Do not let low branches grow fast and become large if they will be removed prior to sale. And use heading to your advantage, but remember to follow up with appropariate pruning to redevelop a leader. These same principles can be used on landscape-sized trees to continue development of a structurally strong tree. 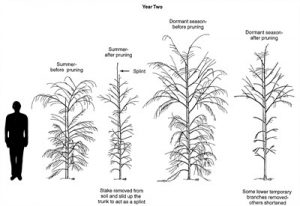 Production protocol for producing a spreading shade tree. Tree is headed, staked and splinted routinely to develop a desirable canopy with a straight dominant trunk.

This article is based on the book, “Illustrated guide to pruning, third edition” due out Summer 2011, by Edward F. Gilman. Dr. Gilman is on the faculty in the environmental horticulture department at the University of Florida, Gainesville. He can be reached at [email protected]