The more you know about tree health, the better you’ll be able to manage disease incidents. This primer will give you a leg up on the competition, whether human or pathogen.

Infectious tree diseases – those diseases that involve not only a tree host, but also an infectious pathogen such as certain fungi, bacteria, nematodes, phytoplasmas or viruses – are among the most vexing maladies that we deal with as horticulturists. Let’s take a look at why this is the case. First, of what do we speak?

Guignardia leaf blight is evident on Aesculus. With such diseases, there is no control after infection strikes and symptoms appear. Above right, ruiting bodies of the Diplodia fungus, seen here, produce microscopic spores that infect tissue in spring.
PHOTOS COURTESY OF JIM CHATFIELD

Some pathogens are moved from tree to tree through insect vectors, such as the Ophiostoma ulmi fungal pathogen that causes Dutch elm disease, vectored by elm bark beetles. Most infectious diseases are caused by fungi, while others are caused by bacteria (fireblight, for example) and nematodes, such as pine wilt disease caused by pine wood nematode. Some diseases, such as Dutch elm disease, are devastating to plant health, while others cause mostly ornamental damage, such as powdery mildews and tar spot of maple. 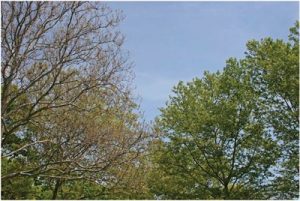 Sycamore anthracnose is worse on American planetree (sycamore on left) than the hybrid London planetree (right).

All these plant diseases are fascinating and important to green industry professionals as they select, install, maintain, diagnose and treat trees. There are features of plant diseases, though, that confound and frustrate not only professionals, but also our customers and clientele. Here are a few things you should know about infectious tree diseases.

Why are infectious plant diseases so difficult to manage? Let us count just a few of the ways.

Dogwood anthracnose is more serious than other anthracnose diseases. Each disease is unique. Inoc

Inoculum, what Gail Schumann and Cleora D’Arcy define in their excellent book Essential Plant Pathology is “the structure or part of the pathogen that initiates disease.” Inoculum can be microscopic spores or thread-like mycelia of fungi, microscopic bacterial cells, microscopic parasitic eelworms known as plant parasitic nematodes, or submicroscopic particles of viruses or phytoplasmas. So small, even regular light microscopes cannot detect this inoculum.

One of the reasons that infectious plant diseases were mysterious for so long, and why disease management is complicated, is that the inoculum of the pathogen is so small that it is invisible to the naked eye when it arrives at the plant, penetrates plant tissue and infects plant tissue. To use a non-tree example, when late blight of potato threatened crops and helped lead to the Irish Potato Famine, the venerable Gardener’s Chronicle opined, “It was suggested that the rot might be caused by static electricity generated in the atmosphere by the issuing puffs of smoke and steam from the hundreds of railway locomotives that had recently come into use, and for all that was surely known it might equally well be due, as others supposed, to mortiferous vapors or ‘miasmas’ rising from blind volcanoes in the interior of the earth.”

We know better now. We have a germ theory of disease. But, let’s not be too proud of our superior knowledge: The invisibility of pathogens to the naked eye when they arrive, penetrate and cause infections on plants still boggles the minds of many if not most of us. We consider insects and mites to be small and hard to see, but they are gargantuan compared to “virulent plant pathogens” that cause infectious plant disease, along with the other two components of the disease triangle: the “susceptible host” and the “environment conducive to disease.”

You still cannot see the pathogen. In fact, you have no idea until symptoms develop on the plant, for example, leaf blighting and discoloration along the veins of a sycamore due to an infection from the sycamore anthracnose pathogen. Symptoms develop for days, usually a week or more, and sometimes months or years after inoculation, penetration and infection. As tree care professionals, we are effectively in the dark all that time. Among other things, this makes effective timing and use of disease-controlling pesticides, such as fungicides, difficult. Symptom development and damage to the plant may be inevitable, even when the infected plant looks fine.

Disease control is preventive, not reactive

So, we do not exactly live in a cloud of ignorance, in a world of “blind volcanoes” and “mortiferous vapors.” Nevertheless, since we cannot see inoculation and infections occur, we must act proactively with regard to plant diseases. This means that in many cases we need to use preventive fungicide applications to prevent that germinated fungal spore from getting into plant tissue in the first place (although there are systemic fungicides that help in some cases).

Better yet and more sustainably, we need to employ our knowledge of genetic disease resistance, plant health and plant stress management to optimal effect. We need to recognize that ‘Sargent’ and ‘Adirondack’ crabapple have excellent resistance to apple scab, compared to ‘Thunderchild’ and ‘Hopa’. If we know that we have a site with the Verticillium fungus well established in the soil, which we can know from previous Verticillium wilt diagnoses, then do not plant highly Verticillium-susceptible species, such as Japanese maples, (Acer palmatum) into that site.

Selecting the right plant for the right site (“which plants matter”) is the greatest preventive maintenance practice we can use, not only for infectious disease management, but also for overall plant health. Eastern redbuds that are planted in open sun, unirrigated sites are more likely to become moisture stressed and are more likely to have Verticillium wilt problems as well as Botryosphaeria canker disease, the two most common infectious disease problems of Eastern redbuds that cause stem dieback and eventual plant death. Prevent from the very beginning by not planting redbuds in those sites.

The environmental component of the disease triangle is crucial for plant diseases. Plant pathologists talk about infection periods for specific plant diseases, and whether or not these infection periods occur depends upon such things as the number of hours of leaf wetness and relative humidity. Of course, this, in turn, is influenced by temperature. All of this plays into the overall weather, and we know how good we are at predicting the weather, even short term, much less long term, as in over an entire growing season.

Temperature and moisture, for example, play a big role in development of fireblight disease. Bad years for fireblight on Callery pear or crabapple usually relate to how warm and wet it is during bloom. The years in which there are massive blossom infections (greatest occurrence during wet weather during extended periods over 62 degrees) are years in which fireblight is worse. So it depends on whether these conditions occurred during the bloom of a particular Callery pear or crabapple in a particular part of the state or region.

Anthracnose diseases on oak, sycamore and ash depend greatly on cool, wet conditions during leaf emergence on these trees. Oak anthracnose is really noticeable on the lower canopy (less air movement) only once in a while – the years in which that oak (mostly in the white oak group) has leaves emerging during extended cool, wet weather. Bad years for rose black spot depend upon the number of times there are a certain number of hours of leaf wetness (exact number of hours needed depends upon the temperature variable) for the pathogen spores to germinate.

For the most part, we cannot use phenological calendars for infectious tree diseases. Phenology is the relationship of environmental factors, such as temperature, to physiological events, such as flowering of plants or emergence and development of insects; using it for insect control timing is fairly straightforward, since it involves simply the temperature variable (heat units and degree days). With plant diseases, however, it is more complex because of the role of moisture in addition to temperature.

‘Indian Magic’ has excellent scab resistance! Does not! Does too; I have an old report to prove it! Did once; but no longer!

The reality is that we are all proud when we notice genetic resistance to infectious diseases in plants. In fact, sometimes we go to considerable lengths and time with plant breeding to develop plants that provide both desired arboricultural characteristics and resistance to certain diseases. However, we have to remember that Nature is at it 24/7 in its own breeding experiments. Over time, pathogens mutate, overcome resistance and parasitize plants that once truly had good genetic resistance relative to a particular disease. Such is life in the jungle. Disease resistance is not necessarily forever, so we have to keep studying and learning and adapting. 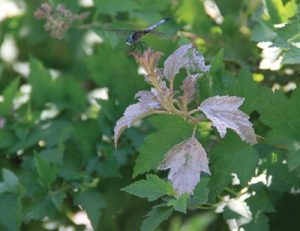 Powdery mildew on ninebark can cause considerable aesthetic damage.

There are so many host plants

Physicians have many advantages over plant doctors, though we at least do not have to deal with mole removal, skin diseases, brain surgery or the pressure of our patients dying a human death. Physicians, however, have patients who talk, even if we so often lie. Physicians also have the advantage of dealing with only one host: Homo sapiens. As we know, even dealing with the diseases and disorders of just one species, humans, can be anything but simple. As tree doctors, we deal with hundreds of different host plants, different species of maples and oaks and different genera from Acer to Zelkova, from Quercus to Xanthophyllum.