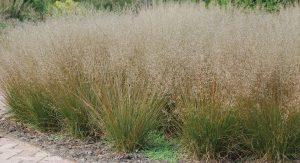 Wispy and whimsical, prairie dropseed is the kind of plant that belongs in nearly every kind of garden. This tough and beautiful North American native has proved itself in a broad range from Canada south to Colorado, into New Mexico and Texas, and east to the New England states.

A dwarf version of the native Sporolobus heterolepis, ‘Tara’ mimics its larger relative with a similar—but smaller—vase-shaped habit. Growing to just 2 to 3 feet tall and wide after several years, ‘Tara’ nonetheless retains the species’ proud bearing and may, in fact, hold its shape a bit more reliably. It is clump forming, making it a good choice for tucking between rocks in an alpine style garden, but it performs beautifully in a natural, prairie setting or in a mixed border. This is an ideal plant for a smaller landscape, especially where clients long for the look of ornamental grasses—but don’t have the room for larger specimens.

Stiff, narrow, medium-green foliage tends to remain upright and maintains its color until fall, when the plant turns a lovely golden yellow. In my small garden, a few of the plants have thrown a bit of red into the mix, and in some areas, fans of this plant report that foliage can turn bronze to orange. Foliage should be cut back in early spring.

‘Tara’ supports delicate, pink to light purple inflorescences that emerge in mid-August in the upper Midwest, and the airy panicles appear to form a mist above the foliage. When backlit by the sun, this beautiful cloud virtually glows. And although I haven’t yet had the pleasure, I’m told that a distinctive fragrance of buttered popcorn hovers around the flowers. That may not be what attracts the local bird population, but its seeds have proved to be a welcome treat.

Like its native forebear, ‘Tara’ is a rugged plant that is resistant to insect pests and can withstand drought conditions. It prefers a sunny location, although my plants have fared well with a good dose of filtered afternoon shade, and it tolerates average, dry to medium, well-drained soil. My site is cursed with heavy Midwestern clay and with just a little bit of cultivation, the grasses have thrived.

Prairie dropseed can be divided, although it’s not an easy task. The beauty of ‘Tara’, however, is that it rarely overgrows its location and division is not necessary. Seed can be collected and sowed, but it’s a shame to deny the birds their meal – and you’ll be challenged to beat them to it.

All aspects considered, ‘Tara’ is a hardy, low-maintenance plant that stands beautifully on its own, but it’s particularly suitable for planting with companions. Coneflower, bee balm, catmint, avens and obedient plant provide a bit of color among the grasses, and ornamental onion—Allium ‘Summer Beauty’ comes to mind—is a reliable compatriot. 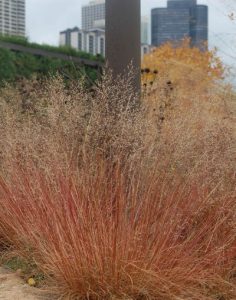 ‘Tara’ was selected for its size and shape by Roy Diblik of Northwind Perennial Farm in Burlington, Wis., whose Panicum virgatum ‘Northwind’ was named 2014 Perennial Plant of the Year by the Perennial Plant Association. Diblik is the author of “Small Perennial Gardens: The Know Maintenance Approach,” which was published in 2008 by American Nurseryman Publishing Company—and quickly sold out. ‘Tara’ was featured in many of the gardens he designed for the first volume. His new, updated book, “The Know Maintenance Perennial Garden,” is due out this month from Timber Press.

Sporobolus heterolepis ‘Tara’ is an appealing and reliable, multifaceted plant that behaves in nearly any kind of garden, plays well with others and provides four seasons of interest. It demands very little and provides so much in return that it deserves a greater presence in gardens across the country.

Landscape use: Prairie gardens; mixed borders; as a groundcover; as an accent or focal point; in rock gardens

Ornamental characteristics: Upright, medium-green, narrow foliage forms a sturdy, vase-shaped habit that supports delicate, pink to light purple, often fragrant inflorescences in August through frost. Foliage turns golden yellow to orange and red in autumn. The wispy flowers float above the foliage like a cloud and, if allowed to remain, offer food for birds and winter interest for gardeners