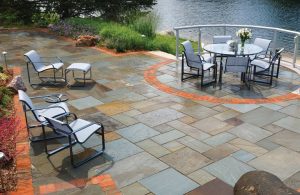 It was a nice idea, once. A suburban Milwaukee back yard overlooked a small private lake, where the original homeowners could splash and paddle and fish in the summer and ice skate in the winter. There was even a small sandy beach, although the residents had attempted to cover some of the sand with turf. A healthy hedge of yews framed the concrete patio, providing definition as well as a bit of privacy.

Soon enough, though, new homeowners arrived and found an aging patchwork of slabs, an overgrown wall of green that obscured the view of the lake and, well, a lot of lost potential.

Enter Ginkgo Leaf Studio. Located in Cedarburg, Wisconsin, the young company was founded by its principal, architect James Drzewiecki, who made the move from designing buildings to designing landscapes. Drzewiecki saw the promise in the property and ultimately transformed a dated, melancholy wedge of land into the retreat the homeowners had dreamed it could be. 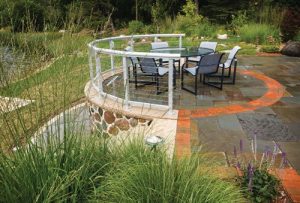 The new dining area, perched atop the rounded retaining wall and protected by a cable rail, appears to be floating above the water. Expanding the patio helped to further connect outdoor living space with the private beach and lake.All photos courtesy of Gingko Leaf Studio

Out with the old

First and foremost, the property owners wanted to take full advantage of their lakeside location. But their stretch of beach was accessed downslope through a poorly maintained patch of “green,” dotted with steppers and defined by rotting railroad ties. Up on the patio, the situation was worse. The hedge planted by previous owners proved to be an obstacle, effectively cutting off the lake view and preventing the residents from enjoying the sparkling natural asset at the edge of the property.

The existing patio had been expanded several times, resulting in a random collection of concrete slabs of slightly varying elevations and colors. Staunchly protected as it was by the solid hedge, the confined space was disconnected from its natural surroundings. The lake seemed an afterthought.

Drzewiecki’s plan, however, was to provide the 1970s era home with a contemporary new living space that embraces the water and invites family and friends to linger outdoors. That meant removing the hedge, replacing the patio and expanding the space to fully emphasize its connection to the water. And that’s only the beginning.

In with the new

Prior to renovation, the patio was a patchwork of mismatched concrete slabs, hemmed in by a yew hedge. Bluestone 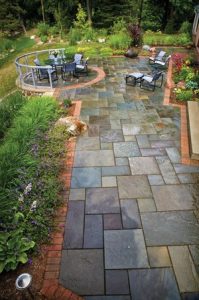 and brick give the area a rich, natural look.

Staging was a little tricky; the home is located on a cul-de-sac in a community governed by a homeowner’s association. And access to the back of the property required a bit of a squeeze through the side yard. Once there, demolition and grading began in earnest. Significant earthwork was required to create a solid and impressive foundation for the patio extension, which is supported by a split-faced fieldstone retaining wall.

“The wall had to be built first,” Drzewiecki explains. “That’s what allowed the dining area to project out from the rest of the patio. I think the client fully expected me to stay within the flat area of their back yard … but because the lake was so important, the idea was to push that dining area out so that when you’re seated there, you feel like you’re really out over the water.”

Demolition of the existing patio began in fall (remember, this project is located slightly north of Milwaukee) and patio construction was performed through the colder months. When the weather began to turn, Drzewiecki had a tent erected to protect both the workers and the installation.

Natural bluestone was selected to replace the broken and bland concrete, and the area now is outlined and highlighted by a course of red brick that reflects the color of the house. Surrounding and defining the radial dining area—which sits atop the projected retaining wall—the brick runs in a soldier and sailor course, giving the effect of a separate room cozied by a permanent “rug.”

A brushed aluminum cable rail provides protection from the steep drop, but it also allows a nearly unlimited sightline from the dining area to the water, reinforcing the home’s connection to the lake. The structure was custom fitted onsite by the installation crew. 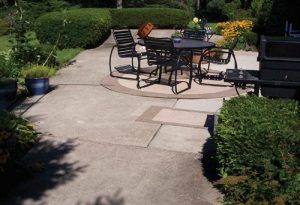 Throughout the patio, natural boulders appear to emerge from the bluestone and surrounding garden. “To give it a little nod to being more natural, you see the various spots where the patio is cut around the boulders. That was to say, this is a natural lake with a natural shoreline around it; let’s imagine that these rocks were here first and that we basically built the patio around them,” Drzewiecki says. “Some of these boulders were actually on site. We just exposed them more or moved them into better locations. That was a task, especially because when you see a boulder sticking out of the ground, you never know how much more of it is below ground.” 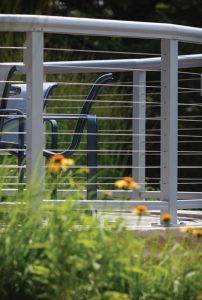 The see-through aluminum and cable railing, which allows for a nearly uninterrupted view of the water, was custom fitted onsite by the installation crew.

A callback, of sorts

Several months after the installation was complete, the homeowner remodeled a room adjacent to the patio, installing a 9-foot-wide sliding door. It provided additional access to the patio, but required an addition to the patio, as well. Drzewiecki designed a seamless attachment, tying the bluestone and brick work into the existing patio. But he went a step further and suggested that the client use bluestone tile in the new room to create the illusion of a continuous surface from indoors out. Now, when the large doors are opened, the room and patio appear to be part of one space.

The radial design of the dining area and retaining wall is embraced by matching lannon stone staircases that lead down to the yard and beach. Grand and natural at the same time, the mirrored structures create an additional point of access to recreation and relaxation. Crews removed the existing steppers and ties, and restored the sandy beach by eliminating the weedy patch of attempted lawn. They then shaped the beach area to reflect the radial approach, fanning out a defined area and making it consistent with the wedge shape of the property. The effect is that of reaching out to embrace the water, just as the patio projects over the wall to become part of the lake. 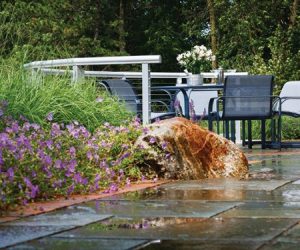 As a nod to the rich natural surroundings, native boulders were incorporated throughout the patio.

Finally, perennials and ornamental grasses were selected for their color and effect. “Normally I prefer to put smallscale trees around the patio, for shade reasons and to help frame the space a little bit better. But with the view of the lake being so important, and the large windows on the house, we actually had to make sure we didn’t put anything that was going to block the view,” Drzewiecki says. “So there is a Japanese maple at the far end of the patio, but it’s offset so that it won’t block most of the views out of the house. And then the rest of the plantings are a combination of ornamental grasses and perennials; not all natives, because we do focus on plants that have long bloom times, and usually that means a cultivar of a native.”

With an architect’s eye for structure and design, and a landscape designer’s sense of natural connections, Jim Drzewiecki embraced the challenge of transforming a dispirited property into the welcoming space that reconnects the built environment with the existing natural beauty and takes full advantage of all that the home and its property have to offer. This lakeside oasis is well-loved by its owners, and rightfully so.