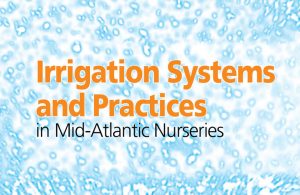 Also of greater concern among nursery producers is the potential for expansion of regulations on irrigation water runoff. In 2010, the U.S. Environmental Protection Agency issued the Chesapeake Bay Total Maximum Daily Load for Nitrogen, Phosphorus and Sediment (TMDL) plan (http://www.epa.gov/reg3wapd/tmdl/ChesapeakeBay/index.html), which calls for progressive reductions in nutrient and sediment pollutant loadings from both point sources (such as water treatment plants) and nonpoint sources (such as nurseries), in order to achieve desired restoration conditions by 2025 in the Chesapeake Bay. Although nurseries and greenhouses are not subject to strict pollution controls such as those faced by water treatment plants, nursery growers in the Mid-Atlantic will likely be affected by state programs initiated to reduce nutrient and sediment runoff from nursery and greenhouse irrigation water runoff and storms.

Development of BMPs and analysis of their costs and benefits is hindered by the lack of information about irrigation and disease management practices of Mid-Atlantic greenhouse and nursery growers. The Census of Horticultural Specialties is the most comprehensive source of data reflecting size and characteristics of the industry. The 2009 Census canvassed a broader spectrum of nursery businesses than utilized in this survey (including Christmas trees, food crops, seeds and transplants grown under protection, and sod). The Census surveyed businesses selling more than $10,000 of ornamental products in calendar year 2009, identifying 291 firms in Maryland, 999 firms in Pennsylvania and 297 firms in Virginia that represented the narrower spectrum of ornamental nurseries and greenhouses.

In 2013, operating nurseries with irrigation systems were surveyed in Maryland, Pennsylvania and Virginia. Input was obtained from academic and industry experts in development of the survey, which included site visits to growers in the 3 states, a focus group with growers and horticultural extension agents, and feedback from scientists and industry cooperators on the research project team.

Lacking a comprehensive list, nurseries were identified through an intensive World Wide Web search of business listings and then contacted to determine if they were still operating and would complete a mail survey. The survey form was designed to be completed in less than one-half hour and consisted of questions requesting information about the nursery’s general business characteristics, the nursery irrigation system, practices used to reduce the risk of disease infestation, and the respondent’s (usually the owner’s) attitude toward the risks of water shortage and disease outbreaks. Of 1,770 surveys distributed by mail, 434 valid returns were received (25 percent response), of which 259 responded that they irrigated ornamental plants in outside growing areas. This brief report summarizes survey results on nursery irrigation systems and practices, and a subsequent article will document responses concerning disease management practices.

Two hundred thirty-eight nursery respondents indicated their 2012 gross revenue. Of these, 152 were “small” businesses (less than $250,000 gross revenue), 51 were “medium” businesses ($250,000 to $1 million gross revenue) and 35 were “large” businesses with revenue greater than $1 million. The relatively small proportion of large businesses generates the majority of total sales. The 2009 Census (of all horticultural specialties) indicates that 40 Maryland nurseries, 50 Pennsylvania nurseries and 36 Virginia nurseries each had more than $1 million in 2009 sales, and that these large nurseries sell from 56 percent to 75 percent of total state nursery sales. 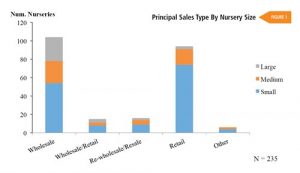 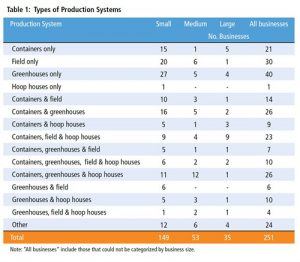 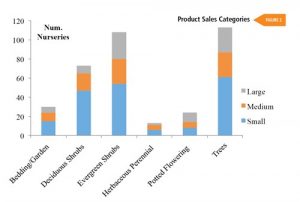 Irrigation Water Source and Use

Respondents were also asked to identify how many times in the past 10 years their nursery had run out or come close to running out of water (see Figure 6). Small nurseries appear to have more secure water sources, with 78 percent reporting that their irrigation water source had never been at risk in the past decade. In contrast, nearly 30 percent of medium and large nurseries had faced at least one year of water shortage in the past decade. Large nurseries were much more likely to have experienced irrigation water shortages, with 11 percent reporting that they had faced a shortage at least five times in the past 10 years. The greater water source risk faced by large nurseries is the likely reason for diversification of their water sources.

To recycle runoff water, it must first be captured and stored in ponds. Information on runoff capture from production areas was requested in the survey (see Figure 7). Overall, 35 percent of all nurseries indicated that they captured some irrigation and storm water runoff from their production area and drained it into ponds. Runoff capture into ponds was least common in small nurseries (22 percent), more in medium nurseries (44 percent) and predominant in large nurseries (83 percent).

Not only do most large nurseries capture some runoff into ponds, such nurseries also drain a higher proportion of 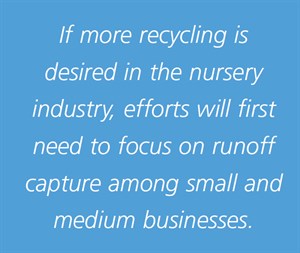 Pond capacity is critical for those nurseries desiring to fully utilize runoff for irrigation, and from the environmental perspective, for retaining excess rainwater from storms on the facility rather than discharging to surrounding streams, wetlands or lakes. 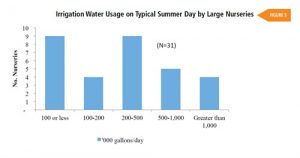 Among the groups that capture water into ponds but do not recycle, two-thirds to three-fourths of respondents indicate that “high cost” or “land not suitable” are the major reasons for not recycling. Also indicated by such respondents was “increased disease risk” and “limited land.”

If nurseries were required by state or federal regulations to capture all irrigation water and runoff from storms, most would find compliance to be difficult and costly. Figure 8 shows modifications indicated as necessary for compliance by business size. Overall, the most common necessary actions would be “construct new ponds in production area” and “modify greenhouse/ production area to facilitate drainage,” followed by “change irrigation practices.” Although this question probed necessary steps for full runoff capture, responses do not necessarily indicate whether nurseries were financially capable of full compliance. In fact, 19 nursery respondents indicated that they would close the business if required to recycle. Clearly, adoption of runoff capture and recycling is viewed as infeasible by many nurseries not currently utilizing this irrigation strategy. 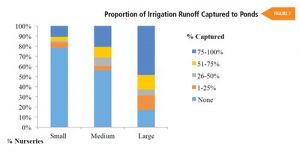 Development and cost analysis of ornamental nursery and greenhouse BMPs would be facilitated by collecting and compiling information about irrigation and disease management practices. This survey collected information from 259 nurseries and greenhouses in Maryland, Pennsylvania, and Virginia about their practices. Responding nurseries display a wide range of production facilities with only a few specializing in containers, field, greenhouse, or nursery production only. Most nurseries concentrate on certain plant categories, but diversify within categories. Approximately three-quarters of large nurseries report production of trees and evergreen shrubs, while 20 to 40 percent of small and medium nurseries produce deciduous shrubs, evergreen shrubs, and trees. Bedding plants, herbaceous perennials, and potted flowering plants are produced by a relatively small number of nurseries across business sizes. 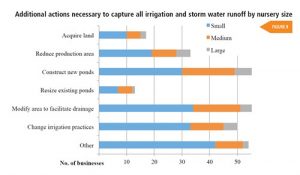 Runoff capture is very common in large nurseries (83 percent), but much less common on small and medium nurseries (22 percent and 39 percent, respectively). Nearly one-half of large nurseries drain at least 75 percent of their production area to ponds, with a much smaller proportion of small and medium nurseries draining that much of their production area (11 percent and 21 percent, respectively). Among nurseries that capture runoff water, only 9 percent have the collection pond capacity to store all typical irrigation and rain water runoff, and much smaller proportions can store irrigation runoff plus runoff from a 2-inch to 3-inch storm, even on large nurseries. If nurseries were required by state or federal regulations to capture all irrigation water and runoff from storms, most would find compliance difficult, if not infeasible. Respondents indicated that actions necessary to achieve compliance with such regulations would involve substantial capital investment, and unsolicited responses by 19 nurseries indicated that they would close their business if faced with such regulations.

It is apparent that larger nurseries are more likely both to capture and to recycle than small and medium businesses. If more recycling is desired in the nursery industry, efforts will first need to focus on runoff capture among small and medium businesses. Increased recycling also brings the prospect of greater expense and monitoring to reduce the likelihood of disease pathogen buildup in irrigation pond water.

Nursery characteristics and opinions with respect to disease management will be reported in a subsequent article.