The Impact of Temperature on Herbicide Activity 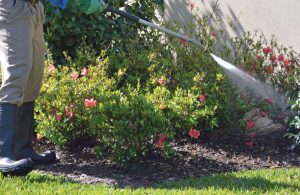 No better source than the Horticultural Research Institute’s Journal of Environmental Horticulture. Just released from the JEH:

Weeds are arguably the most common pest problem in landscape management. Almost everyone can spot a weed, especially when it’s chickweed sticking out like a sore thumb in a stand of dormant bermudagrass in March.

Landscape managers face the challenge of scheduling a variety of activities and, as a consequence, can struggle to stay ahead of spring weed control. Often the first herbicide application is timed in conjunction with mulch laying, creating a labor bottleneck. One strategy to overcome this is to move herbicide applications from springtime to typically less-busy periods, such as late fall/early winter or late winter. This leads landscape managers to ask: Do herbicides still work when applied in cool temperatures?

Research on just this subject was recently reported in the Journal of Environmental Horticulture (JEH), the publication of the Horticultural Research Institute. JEH is the only peer-reviewed, scientific journal dedicated to the green industry and serves as the outlet for research pertinent to our industry.

“In an already tight labor market, the importance of keeping up with the latest weed control research strategies regarding timing and efficacy of applications cannot be taken for granted by today’s landscape manager. In my role, I am very interested in the effects of temperature on weed control strategies, so that I can spread the traditional seasonal workload across 12 months in an attempt to retain more personnel year-round while improving quality and reducing potential overtime costs,” adds Joe Ketterer, Director of Quality and Efficiency with Ruppert Landscape.

First of all, plants’ growth and metabolism slow dramatically in cool weather, which lessens herbicide absorption and translocation within the plant. Secondly, certain physiological changes occur in plants in response to cool temperatures. For example, the wax layer coating plant leaves gets thicker, which limits herbicide penetration (and ultimately efficacy). The increased wax layer also creates a hydrophobic environment, which decreases an herbicide’s leaf wetting capability.

Herbicide formulation merits a mention in this discussion as well, because it may overcome some of the above-mentioned impediments. Ester formulations, as opposed to amines, are more soluble in the plant cuticle – which means it has a better chance of breaching a fortified wax layer – and are more easily absorbed by plants. Combining a contact herbicide (such as carfentrazone or sulfentrazone) with a systemic (such as 2,4-D or dicamba) is another tactic to increase weed control.

Dr. Jeff Derr, Virginia Tech, conducted a series of experiments that accounted for these variables. He assessed the impact of temperature on herbicide efficacy against winter annuals (ivyleaf speedwell, henbit, common chickweed, and purple deadnettle) in turfgrass (both cool and warm season varieties). Contact and systemic herbicide activity was compared alone and in premix combinations, and both ester and amine formulations were included. The following products were tested:

Study results prove valuable for landscape managers. “Control of winter weeds is an important concern for lawn care companies, golf course superintendents, sports turf managers, and others maintaining landscape areas. A concern in winter is the impact of colder air temperatures on the effectiveness of herbicides used for controlling emerged broadleaf weeds. Unless weeds need to be controlled very quickly, landscape managers have a wider window of opportunity to spray post-emergence broadleaf herb-icides than previously thought,” said Dr. Derr.

Using a combination of contact and systemic herbicides, whether a custom tank mix blend or a premix product, increases the chances of winter annual weed control. Products containing carfentrazone (a contact) premixed with a systemic herbicide(s) controlled weeds better than a systemic applied alone. However, premix products in this study contained ester formulations, which also could explain the enhanced performance.

If a landscape manager opts to prioritize speed of weed control, according to their customers’ preference, then herbicide applications should be made in warmer weather conditions. On the other hand, if time management is a higher priority, herbicides can be applied during cooler weather, when more labor may be available. Selecting ester formulations and combining a contact with systemic(s) products may ensure greater success during cooler temperature applications.