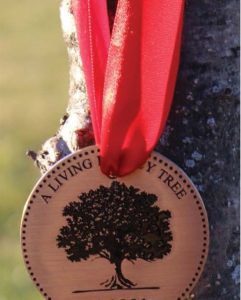 Nurseries are rallying to support a national effort to honor fallen Civil War soldiers by contributing to a 180-mile-long allée that links historic battlefields from Pennsylvania to Virginia. 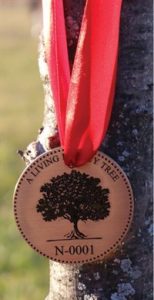 Local and national nurseries have stepped up to support a sweeping and ambitious effort to commemorate the Sesquicentennial of The American Civil War. To honor the lives of the fallen, the nonprofit organization Journey Through Hallowed Ground Partnership launched the Living Legacy Project, an initiative of national significance to plant or dedicate a tree for each of the more than 620,000 soldiers who died during the American Civil War.

The Living Legacy Project will eventually stretch along the Journey Through Hallowed Ground (JTHG) National Scenic Byway, a 180-mile swath of land that runs from Gettysburg, Pennsylvania, to Thomas Jefferson’s Monticello in Charlottesville, Virginia. The JTHG National Scenic Byway, which crosses the Mason Dixon Line, serves as a link to each of the battlefields and connects more than 30 historic communities, each of which was gravely impacted by the Civil War. It is this region that holds the largest concentration of Civil War battlefield sites in the country, including those at the beginning of the War (Harpers Ferry and Manassas), the middle (Antietam and Gettysburg) and the end (Appomattox). Upon completion, the initiative will create the first 180-mile-long landscaped allée in the world and the only allée dedicated to honoring the most defining moment in American history.

The Living Legacy Project will create a unified color palette that reminds visitors that they are, indeed, on hallowed ground. A signature palette of seasonal trees and plantings, including redbuds, red oaks, red maple and red cedar has been selected to represent the courage and valor of the individuals being honored with this project. A secondary palette, including canopy and understory trees, evergreens, shrubs and ground coverings, will also feature red as a predominant color, with plantings including black gum trees, sassafras and winterberry. The native selection is appropriate to the diverse landscapes along this historic corridor and remains sensitive to the local ecology, scenic views and development patterns.

“The Living Legacy Tree Project touched me when I read about it in ‘USA Today’; such a noble tribute to those who made the ultimate sacrifice,” says horticulturist Michael A. Dirr. “How could anyone not want to contribute to such a movement? [A Chinese proverb says] ‘The best time to plant a tree was 20 years ago. The next best time is today.’ 620,000 trees may seem daunting, but the cause is worthy and achievable.” 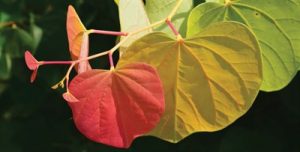 To date, trees have been planted throughout the Journey Through Hallowed Ground National Heritage Area at sites located in Virginia, Maryland and Pennsylvania. The most recent planting took place near Oatlands Historic House and Gardens in Leesburg, Virginia, located at the geographical center of the region and one of two National Trust Historic Sites within the corridor. Oatlands Board Chair Michael J. O’Connor states, “Trees play a central role in the history at Oatlands, from the magnificent maples and oaks that line the drive, to the stunning specimen trees that preside over Oatlands’ historic buildings and walled garden. The trees, many of which were standing during the Civil War, are considered premier and priceless specimens. The planting of over 400 trees for the Living Legacy project will reduce our carbon footprint, create a wonderful habit for wildlife, improve air quality, provide shade for our visitors, and increase the natural beauty of Oatlands, while honoring the rich history and sacrifice of those who have gone before us.”

One of the trees planted along the byway in Virginia is a new and distinct variety of Cercis canadensis known as The Rising Sun™, an eastern redbud tree found and introduced by Jackson Nursery in Belvidere, Tennessee. The peach colored, heart-shaped leaves contribute brilliant, golden tangerine colored foliage all summer with no burning, even in full sun. This durable tree is a vigorous grower with a full, rounded shape and stylishly holds its color into autumn. A third season of interest is provided in early spring by rosy orchid, sweet pea-type flowers. The blossoms appear before the foliage in spring and are attractive to bees and butterflies. New foliage is a brilliant rosy apricot. Even the bark is a smooth tan with a yellowish cast, distinctive from other redbuds.

Jackson Nursery donated 15 The Rising Sun redbuds to the Living Legacy Project and provided 250 more trees at a significantly reduced cost. “I felt like we wanted to be a part of this project,” says Ray Jackson, who owns the nursery along with his wife, Cindy. 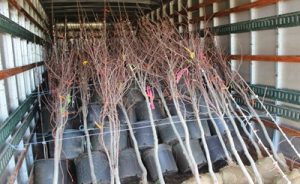 Click image to enlarge.
Bareroot The Rising Sun redbuds are loaded in the back of a truck to haul to Virginia for planting along the Journey Through Hallowed Ground (JTHG) National Scenic Byway.
Photos courtesy of The Living Legacy Project unless otherwise noted.

The Rising Sun is just now gaining popularity and is one of the premier trees on the market. Jackson, who owns the patent and trademark for the tree, found it as a seedling. “When I first saw this redbud, I went wild,” he enthuses. “Fellow nurserymen have said it is the most outstanding golden redbud they have ever seen. This will be a stand out tree for the Living Legacy Project.”

Jackson Nursery teamed with Greenleaf Nursery, allowing the company to include The Rising Sun, which was awarded the 2013 Gold Medal from the Pennsylvania Horticultural Society, in its Garden Debut Program. Randy Davis, President of Greenleaf Nursery, says, “Ray and Cindy Jackson have a real knack for evaluating and selecting great new plants. At the top of their list of new selections is ‘The Rising Sun’, a new redbud that is very distinct. As the plant ages and develops, it layers on multicolored foliage that becomes almost electrifying and is very reminiscent of a beautiful morning sunrise.

“It has been fun and rewarding to team up with Ray and Cindy on the development and marketing of The Rising Sun,” he continues. “We think it’s one of the best new trees available today. The Rising Sun redbud would be a fitting addition to The Living Legacy Project, helping to create an area to remind all visitors of the morning sunrise that we can enjoy on hallowed ground where so many sacrificed their lives. This is a great project to commemorate those individuals.” 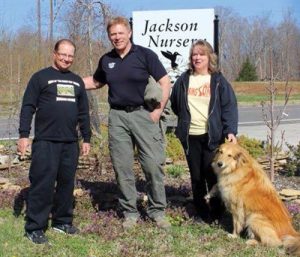 Greenleaf is planning to participate with the Journey Through Hallowed Ground Partnership in an upcoming tree planting, and the organization has a number of other plantings slated for this fall.

Regarding this remarkable plant, Dirr adds, “The Rising Sun eastern redbud introduced by Ray and Cindy Jackson has elevated the species to its rightful place among the great trees of eastern North America. The foliage combines the best colors of the sunrise and the sunset into a singular notable small tree.

“Eastern redbud has long been one of my favorites,” he continues. “In the Dirr garden, there are 11 different redbuds but the one that garners the most attention is The Rising Sun. The pink flowers in late March to April herald the arrival of spring with the beautiful orange to tangerine new growth, followed by birch yellow and at maturity a lemon-lime. As long as the plant is in active growth, the color transformation continues. This neat, well-groomed, always tidy small tree is one of the great introductions of the 21st century. The Rising Sun will be the classic by which all future yellow to golden foliage small trees will be judged.”

On November 19, 2013, the 150th anniversary of President Abraham Lincoln’s Gettysburg Address, 167 new trees were planted on the Bliss Farm at Gettysburg National Military Park as part of the Living Legacy Tree Project. Boyer Nurseries and Orchards, a grower of fruit trees for five generations located in Biglerville, Pennsylvania, supplied the trees for the ceremonial event. Zach Bolitho, Chief of Resource Management for Gettysburg National Military Park, states that the National Park Service has used Boyer exclusively for all the other orchards that the park has put back into the landscape. 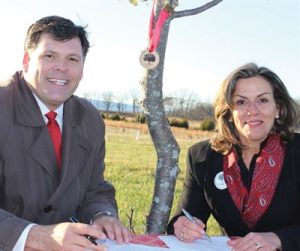 Click image to enlarge.
Ancestry.com Senior Director Brock Bierman and JTHG President Cate Magennis Wyatt sign a Memorandum of Understanding on site at Bliss Farm in Gettysburg. Ancestry.com has come on board as a major partner for the Living Legacy Project, providing research support for the fallen Civil War soldiers through its Fold3.com site.

“The return of the Bliss Orchard on the fields of Pickett’s Charge is one of the milestones for continued battlefield landscape rehabilitation at Gettysburg,” Bolitho states. “Over the past decade, 160 acres of orchard trees have been replaced within their historic footprint all across the battlefield – and Bliss was our last orchard within the major battle action area. Orchards like the Bliss Orchard are important cultural landscape features that ultimately played a role in how battle actions and movements were decided.

“The replanting of the Bliss Orchard speaks to both preserving those historic cultural landscape features and to the essence of renewal and ‘rebirth,’” he adds. “One hundred fifty years later, both memory and physical life live on. Through the thoughtful actions of The Journey’s Living Legacy vision, visitors and community residents can continue to reflect and learn about why Gettysburg is so important to our national heritage.”

Peter Hart, a Virginia-based arborist, has been instrumental in working with many of the nurseries and other partners on behalf of the Living Legacy Project. Among the many things he has done, he has secured a booth at the upcoming TCI Expo (sponsored by the Tree Care Industry Association) this fall. “I really believe this is the green industry’s opportunity to be part of creating something of significance for the nation,” Hart claims. “Just like the stone masons who were part of carving Mt. Rushmore, I’m thrilled to be part of developing the largest allée of memorial trees in the world.”

Shuan Butcher is director of communications for the Journey Through Hallowed Ground Partnership. He can be reached at [email protected]

How you can participate 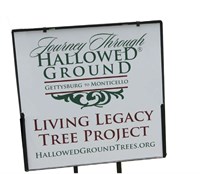 If you’d like to join the effort and donate plants to help build the 180-mile allée, contact the Living Legacy Project at http://www.hallowedground.org.

You can encourage your community to step up, too. The Journey Through Hallowed Ground Partnership is actively engaged in raising the necessary funds to complete this $65 million initiative. Individuals, businesses, schools and community groups from around the world can contribute to the project. The JTHG Partnership is seeking $100 contributions to support and plant each tree. Donors may select a soldier to honor, as the trees will be geo-tagged to allow Smartphone users to learn the story of the soldier, providing a strong educational component to engage interest in the region’s historical heritage.