5 Flowering Shrubs That Live for Shade 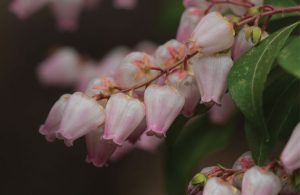 There are hundreds of selections from which to choose, but we’ve focused on five. Let us know what your five favorites are!

Sometimes called lily of the valley shrub, Pieris japonica is also known as Japanese andromeda or Japanese pieris. It’s another versatile shrub that can tolerate full sun to part shade, and it performs best in zones 5 to 8.

In the wild, this broadleaf shrub can grow to nearly 12 feet tall and spread up to 8 to 10 feet; cultivated varieties, however, tend to mature at a considerably smaller size. It prefers rich, slightly acidic, well-drained soil that retains a medium amount of moisture.

The drama is held in the unusual flowers, which begin as strings of small, beadlike buds that are set in late summer, providing winter interest as they wait to fully blossom in spring. Then, up-to-6-inch-long racemes of pink to white, inverted, urn-shaped flowers bloom in profusion. These drooping clusters, while not as richly fragrant as lily-of-the-valley, can emit a fruity fragrance not unlike that of grape hyacinth.

With its evergreen foliage and dense habit, pieris makes a suitable screening plant, or it can be used as a focal point to brighten up a dark corner of the landscape.

Like its common namesake, P. japonica is toxic, especially to pets, and should not be planted in areas where dogs and cats — or young children — are likely to munch the leaves or flowers. With appropriate placement, however, Pieris is a popular addition to the low-light garden.

Known as winter daphne because of the timing of its late-winter, early spring blooms, Daphne odora is a broadleaf evergreen best grown in warmer climates (zones 7 to 9). However, with some protection it can be grown further north; when planted in containers that can be brought into a greenhouse or when sited in a relatively sheltered location, such as the southern side of a structure, winter daphne can perform nicely. It’s happiest in moist, rich soil in part shade, and will struggle if placed in full sun, where the leaves may scorch.

The sturdy foliage is glossy and leathery; each obovate, 4-inch-long leaf is a rich, deep green. Several cultivars have been developed to display creamy or golden margins (such as ‘Aureomarginata’), but the significant attraction is the plant’s clusters of delightfully fragrant flowers. 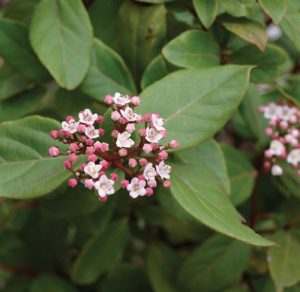 Reddish-purple buds open to rosy pink flowers with lighter centers that bloom in late January in warmer locations and in March through April where it’s a bit cooler. On the ‘Aureomarginata’ cultivar, buds are medium pink and open to a soft pink to white flower. The sweet fragrance is particularly noticeable if the shrub is located near a patio or deck or, provided the area is lightly shaded, the front door. Useful for a low-growing hedge or an understory planting, the flowers and variegated leaves will brighten and scent a low-light space.

Daphnes are somewhat rounded, growing to 3 to 4 feet tall with a spread of 2 to 4 feet; cultivars may vary slightly, but the plant is considered a moderate grower and it is unlikely to stretch to greater size.

You just can’t recommend shrubs without tossing in a hydrangea. Oakleaf hydrangea (Hydrangea quercifolia) is among the easiest to grow and among the largest of the genus. It may reach 6 to 8 feet tall with a similar spread, but more often tops out at about 6 feet. This native of the Southeast thrives in both full sun and partial shade in zones 5 to 9; the plant prefers rich, well-drained soil.

The reason for the specific epithet is the very large, dark green foliage that resembles that of an oak. Featuring three to seven dramatically cut lobes, the leaves retain their deep green until fall, when they turn bright red to red-purple. In winter, the arching, exfoliating branches complete the four seasons of ornamental interest. 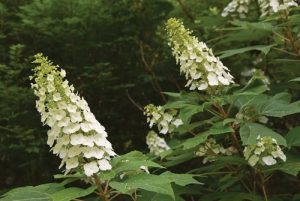 Oh yes — the flowers. Large, proud panicles of gleaming white blooms appear in summer and cover the plant. Flowers bloom on old wood, so if pruning is necessary, it’s best performed after flowering. However, these impressive cones turn from white to rose to purplish pink come fall, which may be an opportune time to cut them for dried-flower displays.

Native hydrangeas are nothing if not adaptable, and the oakleaf variety can be used in a variety of locations and garden styles. Because of its size, however, it’s best sited where it won’t overwhelm companions. Planted singly as a specimen or accent, it stands out, but it’s equally as dramatic when used in mass in an informal, cottage-style hedge.

When viewed from a distance, Japanese kerria (Kerria japonica) may tend to resemble forsythia, with its relatively low-growing habit, arching stems and yellow spring flowers. But it belongs to a different family — Rosaceae — and its flowers are testament to its heritage. Single, five-petaled, yellow to golden yellow, roselike blooms emerge profusely in spring, lighting up the shade garden often before many spring bulbs have had a chance to show off. In some parts of the country, K. japonica is called Easter rose because its flowers typically bloom close to the holiday. A cultivar called ‘Pleniflora’ produces double flowers that appear as happy yellow pompoms. 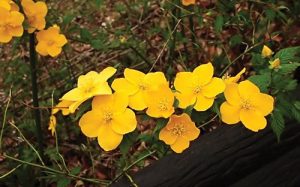 Kerria thrives in part shade and tolerates full shade in zones 4 to 9; in fact, its flowers will pale if the plant is exposed to too much sun. It prefers average, medium-moisture, well-drained soils, but is adaptable to a variety of conditions with the exception of heavy clay. Blooms appear on the previous year’s growth; pruning should be performed after flowering in spring or early summer.

Narrow, long leaves (up to 4 inches long) are toothed and bright green, turning a pleasing yellow in fall, rather echoing the spring display of yellow blooms. Although it is deciduous, Japanese kerria’s autumn show provides at least a third season of interest. 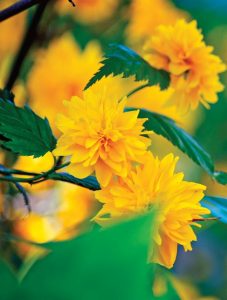 The shrub grows about 2 to 3 feet tall with a similar or slightly larger spread. The species has a tendency to sucker, and the rampant growth can become a problem if not promptly cut back. Still, it’s considered a medium-maintenance plant, with the bonus of being both deer and drought tolerant.

Oregon grape holly (Mahonia aquifolium) is native to the forested areas of the far western U.S., reliably hardy in zones 5 to 8 and a true shade lover. It’s a broadleaf evergreen with a spreading to upright habit, usually reaching 3 to 6 feet tall by 5 feet wide, although if sited close to a wall or fence, it can be trained to grow taller.

Preferring part to full shade, Mahonia enjoys moist, rich, well-drained soils and can spread vigorously by stolons, forming dense colonies. For the best fruit production, it’s best to install more than one plant, as a single specimen will produce sparsely. 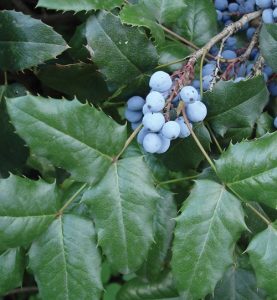 Bright yellow, slightly fragrant spring flowers appear in racemes, followed by clusters of grapelike berries that ripen to a dramatic, blue-black in early fall. The berries are edible, although they may taste somewhat sour or bitter when eaten directly off the branch; jelly is the best way to enjoy the fruit.

Mahonia has a rather wild, untamed appearance, so it’s best used in woodland gardens or in shrub borders. Although it’s deer resistant, birds love the berries.