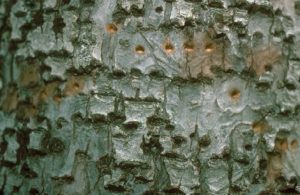 A yellow-bellied sapsucker—a real one, not a cartoon—is caught feeding on a pecan.Photo: James Solomon, USDA 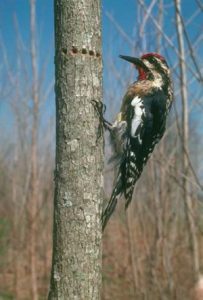 They’re beautiful, they’re entertaining, and they can be downright destructive. The sapsucker (Sphyrapicus species) is a brilliantly ornamented, small to medium, migratory bird that ranges across the U.S., favoring forestland and wooded areas— which, these days, includes parks and back yards with large trees. There are a number of species, including yellow-bellied (Sphyrapicus varius), red-breasted (Sphyrapicus ruber), red-naped (Sphyrapicus nuchalis) and Williamson’s (Sphyrapicus thyroideus). They belong to the woodpecker family, and, like woodpeckers, they’re seen scooting up and down tree trunks, banging holes in the bark. Unlike woodpeckers, however, they’re more often searching for sap rather than insects (although woodpeckers enjoy their share of sap, too).

While their antics can be fun to watch, sapsuckers can create some wicked damage. Their ridiculously strong bills are made for hammering holes in tree bark, from which—you guessed it—they suck the sap. If holes are drilled repeatedly or deeply enough, the birds may also ingest portions of the cambium and inner bark. More than 250 species of woody plants are known to be affected by sapsucker feeding, with thin-barked species being among the favorites.

The damage is easy to identify; more often than not, drill holes will appear in a linear fashion, forming horizontal and vertical rows. The holes may be confused with insect damage, but a telltale sign is the uniform pattern of damage. That doesn’t mean, however, that insects are not present— the drilling and boring exposes sap, which may draw insects to the wounds. (And it’s not unusual for hummingbirds to feed opportunistically from sapsucker holes.)

Sapsucker injury is unsightly, causing aesthetic—and therefore economic—damage to landscape trees and nursery stock. If the damage is extensive enough, however, bark may be girdled or small limbs may fail. Repeated damage to a single tree can produce holes large enough to create weeping or bleeding wounds that attract bees and hornets—and sometimes small mammals. 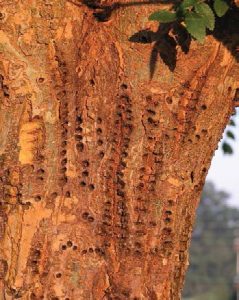 Control is relatively simple. Wrapping burlap around affected trunks may deter sapsuckers, and liquid spray repellents can be effective. For larger stands, scare tactics maybe employed. Hanging shiny objects— those old CDs you no longer use will work, as will pie tins, sheets of foil or streamers. It’ll look like a party, but will discourage sapsuckers. Do not be tempted to shoot them, please. They’re Federally protected. And it’s just not nice.