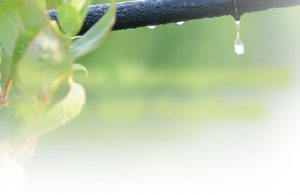 Irrigation water quality and efficient use of irrigation water are ongoing concerns for horticultural firms in the U.S. and across the globe. As competition for scarce water resources increases, risks of water shortages will also increase. As every nurseryman knows, access to sufficient safe irrigation water is a necessity, not an option. In addition, increasing attention is being paid to the quality of water runoff from irrigated agriculture. Irrigation water recycling is a practical step that businesses can use to improve water use efficiency. However, recycling can be costly, not only in terms of infrastructure but also of increased potential for disease pathogen buildup.

In response to these issues, the USDA Specialty Crop Research Initiative (SCRI) funded an integrated research and extension project (USDA Irrigation Pathogens and Water Quality #2010-51181-21140) involving seven universities that is designed to improve water use efficiency and protect the health of ornamental crops. Project objectives include the development of Best Management Practices (BMPs) to increase water recycling on horticultural operations and to mitigate water quality- related crop health risks. (More information on the project is available at http://www.irrigation-pathogens.ppws.vt.edu/.)
The project’s economics team surveyed Mid-Atlantic nursery growers in 2013 (see sidebar). The current article focuses on disease management practices and investigates the relationship between disease risk, disease management and recycling practices. The survey results indicate that nurseries are primarily concerned with financial risks resulting from disease outbreaks and insect infestation. Despite disease concerns, nurseries that recycle at least a portion of their irrigation and storm water runoff appear to have been more successful in avoiding major disease losses. Growers who currently do not capture and recycle consider high costs, increased disease risk and unsuitability of the nursery layout to be the principle barriers to recycling. The article also briefly discusses the project’s recommendations of best management practices for irrigation and disease management for recyclers and nonrecyclers alike.

Disease and insect infestation stand out among financial risk factors

Our project is particularly concerned with disease risks to nurseries. Respondents were asked to rate the individual importance of various threats of financial loss to their business: disease, drought, wind, frost, weeds, insects and hail. The responses were selected from an increasing scale ranging from “not important” to “very important.” Figure 1 shows the proportion of responses indicating that a threat was considered “important” or “somewhat important” by irrigation/recycling type and for all responding nurseries.

Across all nurseries, disease and insects are the causes of financial loss that approximately four in five respondents consider to be somewhat or very important. By irrigation/recycling type, a higher proportion of recyclers regard nearly every threat (except insects) as more important than do other types of nurseries. In general, however, there are only relatively small differences by irrigation/recycling type in the proportion of nurserymen considering a particular risk to be important. 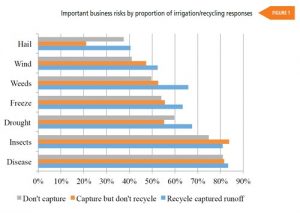 Perceived disease risk based on past experience 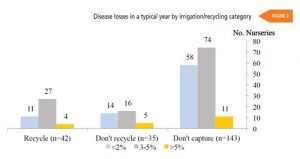 There are many disease vectors of ornamental plants; for example, insects, fungi, bacteria and viruses. Our project is focused on two important sources of ornamental plant disease: Phytophthora and Pythium (see sidebar). Application of untreated irrigation water carries the risk of introducing such waterborne pathogens. These risks increase when irrigation runoff is recycled. Once disease pathogens have entered a system, recirculated water can inoculate plants repeatedly. To evaluate the concern with Phytophthora or Pythium infestations, we asked survey respondents whether each pathogen was “not a problem,” an “insignificant problem,” a “problem” or a “significant problem.” Overall, 34 percent of nurseries considered Phytophthora as a problem or a significant problem, while 27 percent regarded Pythium as a problem or a significant problem. Recyclers had more problems with Phytophthora, with 48 percent of recyclers reporting disease caused by that pathogen as a problem or a significant problem, and 43 percent reported the same for Pythium. Figures 3 and 4 display how recyclers are more concerned about both these diseases, which is consistent
with the expectation that waterborne disease outbreaks are a persistent threat in recycling irrigation systems. 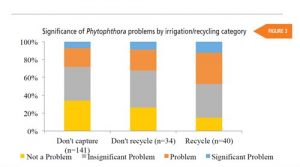 Disease prevention is important to nearly all nurseries

Respectively, 93 percent of recyclers, 83 percent of those who capture but don’t recycle, and 87 percent of those who don’t capture consider disease management and prevention to be important or very important. If disease risk is so important, why do responding nurseries indicate relatively few problems with the major diseases caused by Phytophthora and Pythium? An explanation may be found in the management activities employed to prevent disease damage (Figure 5).

Most respondents (61 percent) indicate that they regularly destroy potentially infected plants to prevent disease, and a somewhat higher proportion of recyclers (71 percent) report regularly using this practice. This “after the fact” disease management does not require knowledge of specific causes of disease, such as Pythium and Phytophthora. Higher plant destruction among recyclers likely is associated with their increased concern in avoiding disease risks. Overall, recyclers differ from non-recyclers in disease prevention methods only in their regular treatment of irrigation water (26 percent vs. 7 percent) and their use of fungicides (50 percent vs. 32 percent). Other methods regularly used by many growers to prevent disease include grouping plants with similar water needs, reducing water applications, or sanitizing the environment. Only a small proportion of respondents (6 percent) report having modified their irrigation system for disease prevention. 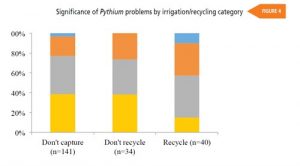 “State of the industry” for disease management and irrigation practices

Because disease is reported as a principle source of financial risk, it’s not surprising that most businesses indicated that disease prevention was an important daily management activity. Across irrigation/recycling categories, 83 to 93 percent indicate disease prevention activities as “very important.” Nurseries manage disease risk through a combination of practices associated with runoff water treatment, irrigation water treatment, and other practices. If a threat of disease is suspected, virtually all nurseries are ready to apply chemicals for control of fungal diseases.

Water treatment is conducted at various stages in the production process. In some cases, source water (such as well water) is treated prior to application. After watering production areas, captured runoff water is generally treated in some manner prior to either release or reuse. Treatments may differ depending on the intended water use; generally, runoff captured and re-applied to plants requires more treatment than runoff to be discharged. Treatment differences reflect differing objectives: Discharge water is generally treated for environmental reasons (for example, to control downstream nutrient levels) and/ or to comply with discharge regulations, whereas treatment of water intended for reuse is generally for disease mitigation. The survey distinguishes between methods used for treating runoff prior to capture or discharge (such as buffer strips, wetlands or erosion controls) and methods for treating irrigation water (such as chlorination or sand filters). 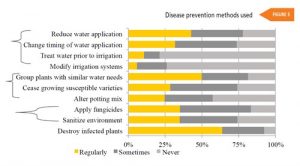 Other practices to manage risk of waterborne diseases

A recommendation by the Irrigation Pathogens and Water Quality Project to reduce risk of Pythium and Phytophthora infestation is to prolong water residence time in storage prior to reuse. Nurseries in the survey were asked to indicate if they had received and implemented recommendations to adjust the number and size of collection ponds, alter water conveyance or alter pump location in order to reduce the potential for diseases caused by these pathogens. Responses indicated that fewer than 10 nurseries had implemented such a recommendation. The Project will be investigating further to estimate implementation costs of these cultural practices.

Left untreated, fungal diseases can destroy large portions of a nursery crop. A sometimes critical element of disease management is the application of fungicides. Seventy-four percent of surveyed nurseries applied fungicides. Table 1 shows average costs of fungicide materials, labor and equipment in dollars and as a percent of total nursery costs for those who responded to these questions. The data show that nurseries generally spend a higher proportion of total costs on fungicide applications than on water treatment. Although recycling nurseries reported higher fungicide costs than nonrecyclers, the average fungicide expenditure as a proportion of total costs is similar across irrigation categories, ranging from 4 to 16 percent.

Survey results suggest that disease is considered to be a top financial risk for ornamental plant growers. Across the spectrum of recycling categories, disease is consistently viewed as a key source of financial risk, but disease is a relatively greater concern for growers who currently capture at least some production runoff, but do not recycle. In contrast, the recycling nurseries appear to be more successful in disease management and have experienced a lower incidence of major disease losses. The data suggest that while disease risk is perceived to be a barrier to recycling, that risk is well managed by recyclers who use water treatment and disease management practices.