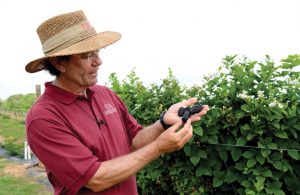 If you’re thinking of jumping on the edibles bandwagon, try adding a little color to your program with a variety of berry plants. Strawberries can be grown in the greenhouse, and brambles or shrubs can be grown in containers or in the field. Whether you go with any of several named varieties or simply produce generic but highly nutritious, in-demand berry plants, this group of edibles has staying power. We’ve recommended some of the most popular here, as well as a few unusual selections. These berries are so delicious they should sell themselves, and most plants are as ornamental as they are productive. But we’ve also offered a few tips regarding their healthy-living value, just in case clients and customers need a little nudge.

There are a number of wholesale suppliers—we’ve listed a few in the sidebar— and they can work with you to determine what’s best for your operation. 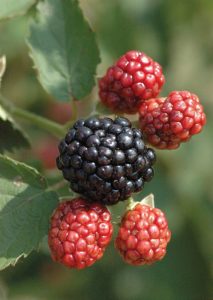 Blackberries are known for their deep, dark color, which is a hint that they contain among the highest levels of antioxidants of all fruits. They also boast anthocyanins, phytonutrients said to protect the brain from “oxidative stress,” which may reduce the effects of age-related conditions such as Alzheimer’s disease and dementia. That’s reason enough for your customers to offer a line to the home gardener.

Rubus Prime-Ark® ‘Freedom’ is the first thornless primocane blackberry: This unique type fruits on current-season canes and second-season canes, potentially providing for two cropping seasons, according to its breeder, John R. Clark of the University of Arkansas System Division of Agriculture. Freedom is the fourth in the division’s Prime-Ark® line of primocane- fruiting blackberries, and it features very large berries with excellent flavor. Initial evaluations show that the fruit is not well suited to storage and shipping, but that just makes it all the more desirable for use in home gardens. 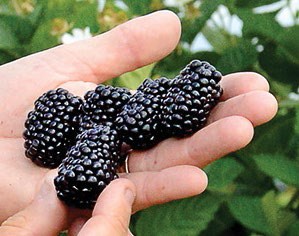 ‘Osage’ blackberry also is thornless with consistently good flavor and high yields. Another University of Arkansas release, it has excellent storage potential for the shipping market. Featuring an upright habit, Osage can be grown as a hedge (with some support), and it’s the first thornless variety selected specifically for flavor. 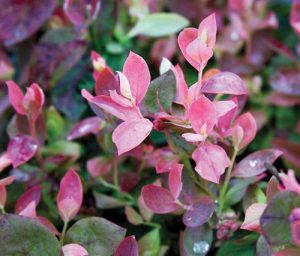 According to the U.S. Highbush Blueberry Council, North American production has increased from 193 million pounds in 1995 to a projected 735 million pounds in 2015; per capita, that translates to 15.5 ounces in 1995 to a projected 50 ounces this year. Low in fat, full of dietary fiber and packed with Vitamin C, it’s no wonder this little ball of nutrition has grown in popularity. And with ornamentally significant plants now on the market, home gardeners are clamoring for more. Among the popular selections are two from the BrazelBerry® line: Blueberry Glaze™ and Pink Icing™. 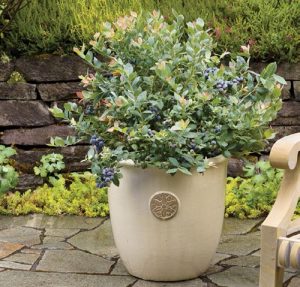 Both of these plants are well-suited for containers, both in production and in the landscape. Pink Icing boasts spectacular spring and fall foliage, and even offers a unique turquoise blue tone in winter. It will grow to 3 to 4 feet tall with a slightly spreading habit and produces large, sweet berries in mid-summer.

Blueberry Glaze offers white and pink spring flowers that pop against glossy, dark green leaves that are reminiscent of boxwood foliage. The mid-summer crop of small berries has an intense flavor similar to the taste of wild blueberries. 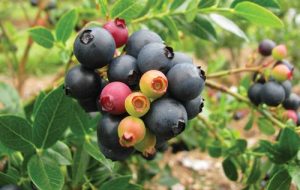 If you’ve got room to grow blackberries, you’ve got room for gooseberries. And why not jazz up your production a little with a berry that’s not always the first on gardener’s lists? You can make it the next “in” thing to grow.

A few selling points: Gooseberries are low in calories. They’re rich in phenolic phytochemicals, which have been found to offer numerous health benefits against cancer, aging and inflammation. Gooseberries offer moderate amounts of Vitamin C, especially when compared with other true berries, but they can be teamed with other fruits and with greens to provide a bit of variety. 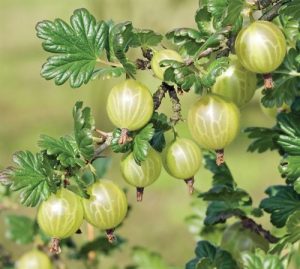 Shrubs are fast growing and reach about 4 to 6 feet tall with a similar spread. Fruiting begins in about two to three years; fruits range from round to oval and pear-shaped, and can be green, white, yellow, purple, reddish brown or nearly black.

Here’s another unusual selection to round out your inventory: the jostaberry. It’s a fast-growing hybrid of the black currant and the gooseberry, producing fruit two to three times the size of a red currant and about the size of a common gooseberry. Most varieties are dark—nearly black— although reddish fruits are also available. 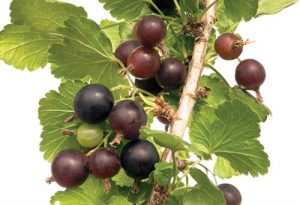 Jostaberry was developed in Germany with the objective of combining the best traits of both parents: Where gooseberry plants have thorns, jostaberry is thornless. It produces a higher yield of fruit than the currant does, and it is considerably more immune and/or resistant to various diseases.

Jostaberries are high in Vitamin C and have a pleasing flavor that brings out the best of the gooseberry with a mild hint of black currant. The shrubs grow 3 to 5 feet tall with a spread of 3 to 6 feet; they’re self-pollinating and can be quite ornamental as well as productive.

Who can resist ripe, red raspberries? Or golden, purple or black raspberries? There’s such a wide range of selections that it will be hard to narrow it down. But here’s some help: Like blackberries, raspberries grow in two types: floricane fruiting and primocane fruiting. Floricane plants produce berries only in summer. Primocane plants, however, are considered “everbearing” and can bear fruit twice in the season; an early summer crop is not as abundant as the later crop, but the plants will produce late into autumn. 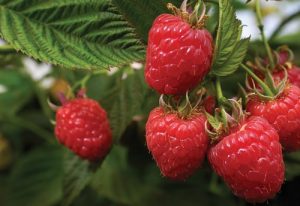 Cultivation for both types is basically the same, but pruning requirements are distinct. Everbearing plants (primocane) should be pruned back to the ground in winter—that means the whole plant. Summer-bearing plants (floricane) should be pruned more selectively. (For a mini-course in pruning, see Cornell University’s “Pruning Raspberries and Blackberries” by Dr. Marvin Pritts at http://www.fruit.cornell.edu/berry/production/pdfs/rasppruning.pdf.)

So, other than irresistible taste, what do raspberries have to offer? They’re low in calories and fat, of course. They’re cholesterol- free and high in fiber, plus high in Vitamin C. Rich in flavonoids that have been shown to play a role in heart health, they also contain ketones that are similar to capsacin, which is also found in red pepper and is said to aid in the inhibition of the growth of cancer cells.

Did we save the best for last? Some would say so. Strawberries are the ultimate grow-it-yourself fruit, suitable for planting in the garden or in patio containers. They’re often grown as groundcovers, and because they produce runners, crops will increase year upon year. Many are self-pollinating, but optimum fruit production can be achieved if a second (or third!) variety is planted nearby. 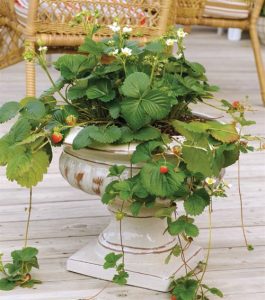 Spring-bearing plants will offer a large crop of fruit typically in June, while everbearing varieties continue to produce throughout the growing season.

These Vitamin C powerhouses, which offer up to 160 percent of the recommended daily value, also are said to help keep blood pressure in check.