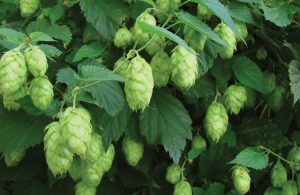 Okay, so we’ve missed Oktoberfest. The steins are empty, the bratwurst is gone. No worry; there’s always time for hops.

Believe it or not, hop (Humulus lupulus; common hop) has a purpose other than flavoring your favorite brew. It’s a somewhat surprisingly ornamental plant, easy to grow and hardy in zones 4 to 8. Known as a vine, it’s technically a “bine,” a plant that relies on stiff hairs that line its very strong stems to help it climb. Unlike many sturdy vines, it’s an herbaceous perennial that dies back to its cold-hardy crown in fall.

Growing 15 to 20 feet (with a spread of about 3 to 6 feet), hop requires support to thrive. Trained on a trellis, a pergola or arbor, this – oh, let’s just call it a vine – self-clinging vine sports dark green, strongly lobed, heart-shaped

leaves that tend to remain clean throughout the season. Fall color is unremarkable, but come fall, it’s not the leaves that provide the attraction.

Hop is dioecious; male plants produce small, yellow-green catkins, while female flowers and the subsequent seeds are carried in unique, pinecone-like structures called strobiles. (It may take a new plant two to three seasons to flower.) These resemble the flowers of ornamental oregano (Origanum ‘Kent Beauty’ is a good example), although they lack the blush to purple coloring. Strobiles remain medium to rich green until fall, when they turn to tan or buff to golden brown. This is the time they’re harvested and the seeds dried for use in beer production, but allowing them to remain is a much more civilized and ornamental strategy. They have a slight pine-like fragrance, which attracts butterflies and hummingbirds.

Humulus is a member of the Cannabaceae (yes, that includes cannabis, but let’s not go there) and is native to Europe and southwestern Asia as well as North America. So it’s easily grown in soils ranging from average to rich, and it prefers partial to full sun. In very hot Southern locations, it’s best to provide some shade. Regular watering is required for new plants, but once it’s established, hop is relatively drought tolerant.

Landscape use: Grown on trellises, pergolas, arbors and other upright supports, the plants can be used to provide privacy or to screen unsightly structures

Ornamental characteristics: Unique structures called strobiles resemble small, green pine cones; when mature, these turn buff to golden brown and, if not harvested for dried arrangements or to use in a home brewery, provide an additional season of interest

Female plants can be propagated vegetatively. Because the plant is dioecious, at least one male plant should be included in a planting to allow the females to produce seed.

Hop suffers from few pest and disease problems, but sensitive growers may suffer from hop: Contact dermatitis is possible, so it’s wise to avoid contact with the skin.

If your customers are game to try home brewing, hops can provide a homegrown ingredient for that special recipe. But the real value is in its unique ornamental presence.